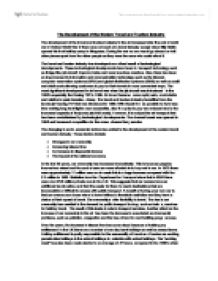 The Development of the Modern Travel and Tourism Industry

The Development of the Modern Travel and Tourism Industry The development of the travel and tourism industry in the uk increased after the end of world war 2. Before World War 2 there was not much of a travel industry except when Billy Butlin opened his first holiday camp in Skegness. During the war no one would go abroad or visit other places apart from the richer people as they were the ones who could afford it. The travel and tourism industry has developed as a direct result of technological developments. These technological developments have been in transport technology such as things like, jet aircraft; improve trains and more luxurious coaches. Also, there has been an improvement in information and communication technology such as the internet, computer reservation systems (CRS) and global distribution systems (GDS) as well as credit and debit cards allowing customers to pay for their travels in more convenient ways. The most significant development in air travel was when the jet aircraft was introduced in the 1950's especially the Boeing 707 in 1958. Air travel became more rapid, safe, comfortable and relative to past decades- cheap. The travel and tourism industry benefitted from the 'jumbo jet' boeing 747 that was introduced in 1969. With the jet it was possible to fly in less time making long haul flights more accessible, also the price to pay was reduced due to the increased capacity of the jumbo jet (400 seats). ...read more.

They were first originated by Billy Butlin in the 1930s who opened his first holiday camp at Skegness on the Lincolnshire coast in 1936. Holiday camps worked on the principle and motive that if children were happy on holiday, then parents would be too. In this type of holiday Butlin's, Pontin's and Warner's became market leaders. In the recent years they have modified these camps to meet changing consumer needs and expectations. New types of holiday centres have evolved such as Centre Parcs. Because of the huge growth in travel and tourism there has been a change in consumer needs and expectations. There have been significant changed due to cultural and social factors. We also now demand higher standards of quality and customer service. The simple sun sea and sand holidays in the 1960's seem less popular with people nowadays, and more flexibility is demanded. These days, customers prefer to choose the type of accommodation, the board basis, and the type of transport and the length of the holiday. Package holidays now offer this choice. Special-interest holidays have particularly been developed more to cater for a range of interests. Holidays that have become increasingly important are activity and adventure holidays, especially the ones that include activities such as white-water rafting or scuba diving. ...read more.

and the Americas (282 million), followed by Africa, the Middle East and South Asia. However, it is impossible to make precise predictions in travel and tourism. The following examples may or may not happen. A development that is likely to take place over the next few years is space tourism; other developments in transport technology included the Airbus's 8380 'superjumbo' with 555 seats compared to the regular boeing 747 jumbo's with 415 seats. The Chinese and Russian markets, with a population of 1.3 billion, are likely to attract many new tourists. VisitBritain is expecting a double in the number of tourists from China to the UK in the next 5 years to 130 000, and the number of visitors from Russia to increase by 50% in the same period to more than 200 000. These upcoming markets are targeted by travel companies. Russians see the UK as a desirable destination. Chinese consumers are cost and quality conscious and are less likely to buy on-line as they do not have credit cards. According to the WTO, china itself is expected to become the worlds leading tourism destination by 2020, with some 100 million outbound tourists and 130 million each year. The conclude the development of the modern travel and tourism industry is primarily due to the changing socio-economic factors, technical developments, product development, external factors, the change in customer needs and expectations and the up-growing future trends in travel and tourism. ...read more.