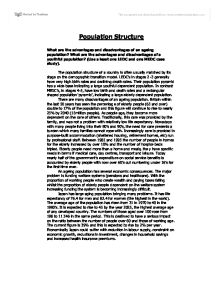 Population Structure What are the advantages and disadvantages of an ageing population? What are the advantages and disadvantages of a youthful population? (Use a least one LEDC and one MEDC case study). The population structure of a country is often usually matched by its stage on the demographic transition model. LEDC's in stages 2-3 generally have very high birth rates and declining death rates. Their population pyramid has a wide base indicating a large youthful dependent population. In contrast MEDC's, in stages 4-5, have low birth and death rates and a rectangular shaped population 'pyramid', indicating a large elderly dependent population. There are many disadvantages of an ageing population. Britain within the last 50 years has seen the percentage of elderly people (65 and over) double to 17% of the population and this figure will continue to rise to nearly 25% by 2040 (15million people). As people age, they become more dependent on the care of others. Traditionally, this care was provided by the family, and was not a problem with relatively low life expectancy. Nowadays with many people living into their 80's and 90's, the need for care presents a burden which many families cannot cope with. ...read more.

It is often assumed that in developing countries, ageing proceeds faster in urban areas where fertility and mortality declines are typically more advanced than in rural settings. In reality, however, ageing in rural communities usually manifests itself earlier and advances more rapidly than in the cities. By far the most important determinant is rural-to-urban migration, which comprises mainly younger adults and thus increases the proportion of older persons 'left behind' in the villages. In some rural areas, ageing is further accelerated by factors such as the return of older persons, often upon retirement from the urban workforce, or the increased mortality among younger adults due to HIV/AIDS. Thus, in the majority of poorer countries, ageing is predominantly a rural phenomenon. An aging population means that there food supplies decrease in LEDC's leading to potential famines. This is because traditionally the younger people support the older generation and so they have less time to grow crops as well as a smaller workforce to produce the crops. Also an aging population will inhibit their development. However there are some beneficial consequences of an ageing population. Some manufacturing companies have tapped into the growing niche market for products such as wheelchairs and stair lifts. ...read more.

This therefore limits economic performance as shown by the very low GDP per capita of $540/capita. The rapid population growth causes problems such as exhaustion of resources, soil erosion, pollution, deforestation, lack of food supply, unemployment, income insecurity, overstretched health and educational service, lack of suitable housing and creation of squatter developments. A youthful population and rapid population growth rate should be dealt with for the country to develop. However to do this often drastic polices such as China's one child policy might be introduced. This can cause further problems such as female infanticide. Due to the high youthful population as much as 50% of the population live below the poverty line. However a youthful population can have advantages. In some countries economic development is stifled due to lack of human resource e.g. Singapore. Here the country has more than sufficient job opportunities and resources and in fact must get 40% of its labour force from abroad. To solve this problem and hence invest in its own economy Singapore is introducing polices to get a much larger youthful population. In India it is part of tradition to have many children because the subsistence way of life requires young, fit and mobile people to work the fields thus providing and supporting the elderly. Without the youthful population many elderly people would struggle to support themselves dying younger and lowering life expectancy. ...read more.