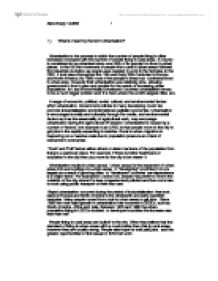 What is meant by the term Urbanisation?

1.) What is meant by the term Urbanisation? Urbanisation is the process in which the number of people living in cities increases compared with the number of people living in rural areas. A country is considered to be urbanised when over 50% of its population lives in urban places. In the UK the movement of people from rural to urban areas followed the industrial revolution as people were needed to work in the factories in the CBD. It took place throughout the 19th and Early 20th Centuries in Europe and North America. By 1950 most of the people in these two continents lived in urban area. However their urbanisation was relatively slow, allowing government's time to plan and provide for the needs of increasing urban populations, in Less Economically Developed Countries urbanisation serves to be a much bigger problem and it is here where the world's largest cities are. A range of economic, political, social, cultural, and environmental factors affect urbanisation. Government policies in many developing countries promote industrialisation and international capitalist economies. Urbanisation is encouraged socially and culturally through the media, and environmental factors such as the seasonality of agricultural work, may encourage urbanisation during the agricultural off-season. ...read more.

The growth in information technology such as -mail, faxes and video conferencing means that more people can work from home, so they don't need to be near their work place that's in the city. Urban areas in MEDCs are becoming increasingly unpleasant places to live, as a result of pollution, crime, traffic congestion and huge increases in population e.g. London, UK. People are having to live in places of a lower standard of living compared to that of normal MEDC life. These are 'push' factors and are deterring people from living in the inner - city, and so push them further and further out of the city into rural areas, where the standard of living is much higher. This causes urban sprawl and counter urbanisation. More people tend to move to rural areas when they retire and want to be in a calm and peaceful environment away from the busy and pressurising surroundings of the city. This increases the population density of the rural areas. Due to urban sprawl, industries start moving out from the CBD and start to build trade on the outskirts where land is cheaper, there's less/ no congestion and there is no limit for space. ...read more.

These records show that Mexico City's population must have tripled over in the 45 years. However I believe the 2000 census to be most interesting: 1.) Mexico City, Mexico - 25.6 million 2.) Sao Paulo, Brazil - 22.1 million 3.) Tokyo, Japan - 19 million 4.) Shanghai, China - 17 million 5.) New York, USA - 16.8 million This shows that Tokyo, a NIC (newly industrialising country) figures have dropped by 8.2 million. This maybe due to counter urbanisation, urban sprawl, or very low standard of living within the city. Shanghai's population has risen by 12.3 million and Mexico City's by 12.4 million since 1950 which calculates as to having 75 people migrating to the city every day over the past 45 years on average. There is only one MEDC - New York which remains in the top 5, and in over half a century the population of Mexico City has increased by 500% and probably more. From the research it is clear that counter urbanisation and urbanisation is dramatically different in MEDCs and LEDCs due t a number of factors which consist mainly of push and pull factors. The LEDCs city populations are heavily increasing and the MEDCs city population are not yet decreasing but are levelling. 1 Alice Brady 13JMW ...read more.