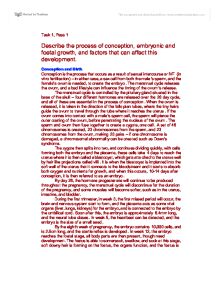 Task 1, Pass 1 Describe the process of conception, embryonic and foetal growth, and factors that can affect this development. Conception and Birth Conception is the process that occurs as a result of sexual intercourse or IVF (in vitro fertilisation) - in either case, a sex cell from both the male's sperm, and the female's ovum is needed, to create the embryo. The menstrual cycle releases the ovum, and a bad lifestyle can influence the timing of the ovum's release. The menstrual cycle is controlled by the pituitary gland situated in the base of the skull - four different hormones are released over the 28 day cycle, and all of these are essential in the process of conception. When the ovum is released, it is taken in the direction of the fallopian tubes, where the tiny hairs guide the ovum to travel through the tube where it reaches the uterus. If the ovum comes into contact with a male's sperm cell, the sperm will pierce the outer coating of the ovum, before penetrating the nucleus of the ovum. The sperm and ovum then fuse together to create a zygote, one cell. A set of 46 chromosomes is created, 23 chromosomes from the sperm, and 23 chromosomes from the ovum, making 23 pairs - if one chromosome is damaged, a chromosomal abnormality can be created such as Down's syndrome. ...read more.

During the eighth month of pregnancy, the baby continues it's growth, by week 35 it weighs 2800g, and gains around 280g per week from this time. The head grows more than the rest of the body to allow for rapid brain growth, and the fine downy hair starts to disappear from the body. The baby now also swallows, urinates, and can make breathing movements. Glycogen forms in the baby's liver which the baby uses, along with it's fat reserves, during birth as a source of energy - it also helps while the baby is establishing a feeding pattern. The head usually engages in the pelvis at this time. The final month of pregnancy (weeks 37-40) provides the final preparations and changes to both mother and baby's bodies, the amniotic fluid reduces while the baby is growing to fill the space in the amniotic sac, and at 37 weeks, the baby weighs about 3kg, and is lying head down - birth will occur any time between weeks 38-42. Developmental Influences The lifestyle choices that a woman makes while trying to become pregnant is incredibly important for both her and the baby's development, for instance, diet is a huge factor. In the first two months of pregnancy, consuming too much Vitamin A can increase the risk of the baby having a birth defect, and an all round balanced nutritional diet is essential to ...read more.

����__ o Raw meat and poultry o Unpasteurised milk o Untreated water o Raw eggs and raw egg products These should be avoided due to the risk of campylobacter and salmonella, which can cause food poisoning, that may lead to a miscarriage. __ o Unwashed raw fruit and vegetables o Raw/Undercooked meat o Cured meats o Unpasteurised goats' milk or cheese These can cause toxoplasmosis, which is an infection caused by a parasite that is found in cat faeces, raw meat, and vegetables with soil on them. __ o Liver o Liver products, e.g. Pate Too much Vitamin A can harm an unborn baby; no high dose multivitamins should be taken throughout pregnancy. __ o Shark, swordfish, and marlin - high mercury level can damage nervous system of unborn baby, and avoid shellfish, to reduce risk of food poisoning. __ It is important that a woman should avoid consuming more than 200mg of caffeine per day while pregnant, as the body absorbs iron differently when caffeine is an influence. High levels of caffeine can result in a baby with a low birth weight or a miscarriage. This means women should not consume more than two mugs of tea or five cans of cola or four chocolate bars. Flu and cold remedies also contain caffeine. ...read more.