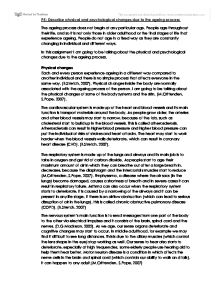 Describe physical and psychological changes due to the ageing process

It can happen to any adult.(M.Crittenden, S.Pope, 2007) The musculo-skeletal system is formed by the bones of the skeleton and their striated muscles. Ageing can result in the shrinking of the skeletal muscles, which we use to walk, move about and lift things. Arthritis can also occur and it involves damage to joints within the body. This is because cartilages (a substance used to cushion our bones as we move) start to become thinner and weaker, or in some cases it can be the other way round, where bone ends become thicker which restricts movement of the joint. This is the reason why people suffering from arthritis often experience stiffness and pain when they move their hips or knees. (B.Stretch, 2007) The condition of an individual's skin is one of the ways in which we can tell their age. Collagen in the skin tends to loose elasticity as we grow older. The appearance of ageing skin has become associated with unattractiveness by some people, which can have a harmful effect on their sense of well-being. Psychological changes Each person's experience of psychological changes is likely to be the same. The psychological changes that happen as people age can affect their confidence and self-esteem. ...read more.

This can include loss of a work role and income, which is routine that they have been used to for some time. Also they loose a partner or a close friend which is also a loss of emotional support. Loss of a partner/friend Bereavement may be the result in a whole range of changes and losses. The loss of a partner can cause temporary anxiety and depression. There is also a chance of the loss of self-confidence because the person may feel that there is no-one that can re-assure them and they could feel they have no-one to talk to. Ageism As people get older they may find that they will start to get stereotyped as being useless, diseases, demented and unable to cope. They also may start to experience prejudice from younger people who see them as 'already had their lives'. Financial concerns In some cases people over the age of 65 and over may live in poverty within the UK. This could be because they might not of had a private pension fund. Studies have also shown that one in five people in the UK have had problems with paying for heating, shopping and coping financially. (B.Stretch, 2007) D.G Mackean, 2002, GCSE Biology; third edition, John Murray Ltd, UK ...read more.