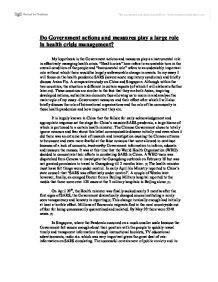 Do Government actions and measures play a large role in health crisis management? An analysis with respect to Singapore and China.

Do Government actions and measures play a large role in health crisis management? My hypothesis is the Government actions and measures play an instrumental role in effectively managing health crisis. "Health crisis" here refers to an unstable turn in the overall condition of the people and "Instrumental role" refers to an undeniably important role without which there would be largely unfavourable change in events. In my essay I will focus on the health pandemic SARS (severe acute respiratory syndrome) and briefly discuss Avian Flu. A comparative study on China and Singapore. Although within the two countries, the situation is different in certain aspects (of which I will elaborate further later on). These countries are similar in the fact that they are both Asian, inspiring developed nations, authoritarian elements thus allowing us to zoom in and analyse the main topic of my essay -Government measures and their effect after which I will also briefly discuss the role of International organisations and the role of the community in these health pandemics and how important they are. It is largely known in China that the failure for early acknowledgement and appropriate response set the stage for China's massive SARS pandemic, a large blame of which is portioned to a certain health minister. ...read more.

Another key difference is the response time and its effect. In Singapore where the fore mentioned measures were imposed soon after identification of index cases. The chain of infection was quickly broken. By contrast China's delayed response to the epidemic rendered contact tracing impossible, removing a key weapon they had against SARS. However, when analyzing the effectiveness of each Country's actions and measures. One must take into account China's vast size and population caused the distribution of information to be more difficult. The "Archaic" mode of Healthcare especially in rural areas made getting healthcare for people (infected by the migrants) virtually impossible. The average cost of hospitalization was equal to the average rural families' total income for a year. Thirdly because SARS started in China, the authorities may have felt embarrassed to admit or further admit to such a disease, which they started which they allowed to spread to other countries', fearing a disruption to the economy, social lifestyle etc. Obviously this action caused quite the opposite effect. Fourthly, at the time in China, authorities and experts were confused because of a separate number of deaths of avian flu during the same period in Foshan. Lastly in China, Under Chinese law health epidemics are considered "state secrets" whereby national level authorities have control over all public announcements about disease outbreaks while provincial officials have no power to comment publicly. ...read more.