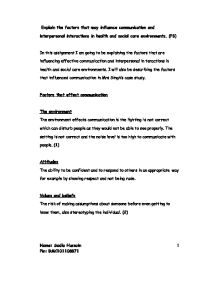 Explain the factors that may influence communication and interpersonal interactions in health and social care environments.

This is not a suitable setting as lunchtime is the busiest time in a ward, as a lot of noise is made. Another problem with the setting was that the (MDT) multi - disciplinary team are all seated around the table on high chairs, whilst Mrs Singh and her husband are sitting in lower 'patient' chairs. This influences the communication badly because it will make Mr and Mrs Singh feel uncomfortable and will make them feel pressured and disempowered. As they are on lower chairs which may lead to the message not being received or not understood properly, as the MDT may not give eye contact. As both in the meeting, the communication between Mrs Singh and the MDT is not going to be dully positive. As the service providers are not sitting at the same level as Mrs Singh and Mr Singh which shows less eye contact will be made. ...read more.

She appears to be rather aggressive because of her tone of voice. If the MDT team had chosen a better place to have the meeting there would have been less noise. And the nurse would not have had to speak loudly, but Mr Singh and Mrs Singh misunderstood and made them feel that the nurse was being aggressive towards them. This would affect the interaction by making Mr and Mrs Singh feel that they the nurse is not being friendly to them but instead is being aggressive. It also would have affected the interaction by making Mrs Singh feel scared to ask any questions if she or her husband had any. Time The meeting was rushed as the conversation begins to speed up as time was very limited and the doctor needs to leave very shortly. Enough time was not given to Mrs Singh to explain what needed to be said to her. The meeting should have been set at a better time when everyone had a lot of time to discuss the issue. * Setting ?? ?? ?? ?? 1 Name: Sadia Hussain Pin: BMC101108871 ...read more.