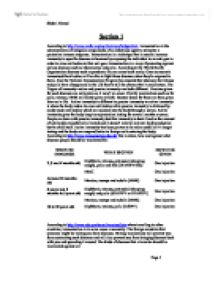 Immunisation is a technique that is used to increase immunity to specific diseases.

Section 1 According to http://www.amfar.org/cgi-bin/iowa/bridge.html, immunisation is the administration of antigenic components of an infectious agent to stimulate a protective immune response. Immunisation is a technique that is used to increase immunity to specific diseases in humans by exposing the individual to an anti-gen in order to raise ant-bodies to that anti-gen. Immunisation is a way of protecting against serious diseases such as tuberculosis and polio. According to the World Health Organisation diseases such as pandemic flu can come back easily. Once someone's immunised their bodies will be able to fight those diseases when they're exposed to them. Also the National Immunisation Program has ensured that diseases like tetanus and polio have disappeared in the UK there's still the chance that it could return. The 2 types of immunity-active and passive immunity-are both different. Vaccines given for such diseases are only given so it won't re-occur. Priority vaccinations such as for polio, tetanus, MMR are mostly given at birth. Booster doses for these are then given later on in life. Active immunity is different to passive immunity as active immunity is when the body makes its own anti-bodies while passive immunity is obtained by ready-made anti-bodies which are injected into the body through a serum. Active immunity gives the body long-term protection lasting for several months or years. People are born with passive immunity but this immunity is short-lived as the amount of anti-bodies transferred is limited and it doesn't involve any anti-body production by the child itself. ...read more.

Tetanus Tetanus is a disease which affects the muscles and can cause breathing problems. This disease is contracted through a cut or wound from bacteria which can be found in soil and manure. Symptoms include: * Headache * Muscular stiffness in the jaw (lock jaw) * Stiffness of the neck * Difficulty swallowing * Spasms * Fever Complications can develop through these symptoms. E.g., the muscular stiffness in the jaw may prevent the patient from opening and closing their mouth and can lead to suffocation. Pertussis This disease is also known as whooping cough. It's an infection of the respiratory system caused but the bacterium Bordetella Pertussis. It's a disease that can cause long bouts of coughing and choking making it harder to breathe. It can last up to 2 weeks. It's not serious in older children and adults but the groups most at risk are infants especially those under the age of 1. The disease mainly attacks the respiratory system and central nervous system. A majority cases involve some degree of lung collapsing or pneumonia. Older children and adults may easily recover from this but it can be fatal for babies. However, if pneumonia is severe enough it can lead to death. Those who overcame this disease usually don't have any permanent lung damage Hepatitis A Hepatitis A is caused by consumining contaminated food and water. ...read more.

Infants under 6 months may not receive vaccinations because it's too risky * People are suffering from fever or serious infections * If you're pregnant, unless specifically advised by your doctor. * Have a allergic reaction to the vaccine Section 3-Evaluation There are many advantages when it comes to receiving immunisation. It doesn't only prevent you from getting the disease but also prevents you from passing it around. These vaccines save lives and without it there would probably be an epidemic of them. They also increase people's life expectancy. I think the disadvantages of vaccines are small. However, vaccines don't always help. E.g. The Typhoid vaccine doesn't prevent someone from contacting the disease from contaminated water. Also people are scared and sometimes unaware of what vaccinations can do. E.g. some parents would prefer that their child didn't receive MMR vaccine because they believe that it might actually harm their child rather than protect him/her from diseases. The physical effects (side effects) that some people might have from vaccines seems less worse than the emotional effects of it. Some people are scared of needles so having to go to the doctor to get a jab seems really frightening to them. Also some people might not want even have a jab because of religious or cultural reasons. ?? ?? ?? ?? Shukri Ahmed Page 1 ...read more.