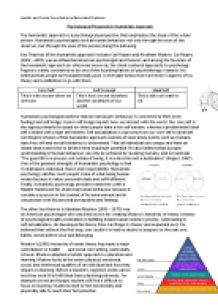 Transfer-Encoding: chunked ﻿Health and Social Care National Extended Diploma Psychological Perspective: Humanistic Approach The humanistic approach is a psychological perspective that emphasizes the study of the whole person. Humanistic psychologists look at human behaviour not only through the eyes of the observer, but through the eyes of the person doing the behaving. Key Theorists of the humanistic approach includes Carl Rogers and Abraham Maslow. Car Rogers (1902 ?1987) was an influential American psychologist and theorist, and among the founders of the humanistic approach (or otherwise known as, the client-centered approach) to psychology. Rogers is widely considered to be one of the founding fathers of psychotherapy research. He believed that people are fundamentally good. ...read more.

Our core self is the aspect primarily focussed on when people have a low self esteem, whereas a predominant ideal self is linked with a high self esteem. Self actualisation is a process from our core self to ideal self. Carl Rogers?s theory of the humanistic approach consists of several key points, such as, humans have free will and not all behaviour is determined. That all individuals are unique and have an innate desire and drive to achieve their maximum potential. He also believes that a proper understanding of human behaviour can only be achieved by studying humans, and not animals. "The good life is a process, not a state of being. ...read more.

He developed his theory from Carl Rogers?s theory and expanded on it. He believed that without the first step, you couldn?t or had no desire to progress to the next one. Safety comes before Love and Belonging. https://upload.wikimedia.org/wikipedia/commons/thumb/6/60/Maslow%27s_Hierarchy_of_Needs.svg/450px-Maslow%27s_Hierarchy_of_Needs.svg.png Maslow's (1968) hierarchy of needs theory has made a major contribution to health and social care setting, particularly schools. Maslow adopted a holistic approach to education and learning. Maslow looks at the entire physical, emotional, social, and intellectual qualities of an individual and how they impact on learning. Before a student's cognitive needs can be met they must first fulfil their basic physiological needs. For example a tired and hungry student will find it difficult to focus on learning. Students need to feel emotionally and physically safe to reach their full potential. ...read more.