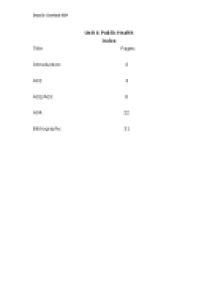 ﻿Danielle Crawford 8034 Unit 6 Public Health Index Title Pages: Introduction: 2 A01: 3 A02/A03: 8 A04: 22 Bibliography: 31 Introduction I am going to look at a public health issue that affects the public as a whole population. Public health is about improving the health of the population, rather than with individual health. There are many public issues that are dangerous and unhealthy to the population, the one that most took my interest was skin cancer. I will gather statistics, graphs and research to help me gather more knowledge about the issue and how the government promotes health campaigns and education to warn people about the dangers of it. Government strategies and methods are developed to promote and protect the public on the health issue as well as minimize the actual or potential impact of the issue itself. The number of people in the UK suffering from skin cancer is increasing dramatically every year. The service user group that suffers from skin cancer are male and females mainly in the early adulthood category, middle adulthood category and later adulthood category, this range from the ages 19-100+. Although adulthood is the main group suffering with skin cancer, children and teenagers in the early childhood and adolescence category is also increasing, this range from the ages 3-18. This is due to parents, teenagers, adults and children not being aware how damaging the sun is, and also not using enough sun protection to cover their skin or abusing tanning treatment. A01 Health is a concept of which we all have some understanding, but is difficult to define. Health is sometimes understood and defined as ?negative?, ?positive? and ?holistic?. Health is defined in the WHO constitution of 1948 as ?A state of complete physical, social and mental well-being, and not merely the absence of disease or infirmity?.[1] The ?negative? approach is a common way of defining health, whereby health is defined in terms of absence or illness. ...read more.

There are many risk factors on how skin cancer is caused. The main preventable risk factor for skin cancer is excess exposure to ultraviolet radiation, the principal source of which is the sun. A study published in December 2011 estimated that around 86% of malignant melanomas in the UK in 2010 were linked to exposure to UVR from the sun and sunbeds, with a higher proportion in men (around 90%) than women (around 82%). Sunbeds and sunlamps are a source of artificial UVR. ?Before the 1980s these appliances primarily emitted UVB and sometimes UVC. Since then, commercial salons using mainly UVA lamps (these lamps may also emit some UVB) have become popular.?[22] This variable spectral output over time and also between appliances, complicates the measurement of risk. In 1999 a quarter of men and a third of women in Britain reported using a sunbed or tanning machine in the previous six months and there was even higher use amongst young people. Any impact of sunbed use is therefore likely to be greater in the future. The diagram below show what UVA, UVB and UVC is: [23] Another risk factor which isn?t caused by the people themselves is people with a family history of melanoma. They roughly double the risk of developing the disease compared to people without a family history of carriers. ?Rare families exist in which 3 or more cases occur. In these families a significant proportion have a hereditary susceptibility gene such as CDKN2A and as gene carriers are at considerable lifetime risk of melanoma.?[24] People with a family history of squamous cell carcinoma or basal cell carcinoma have an increased risk of non-melanoma skin cancer. Skin cancer became a very popular public issue as the numbers of skin cancer suffers were increasing dramatically over a year. The most worrying part of the public issue was the increasing numbers of skin cancer sufferers from the adolescence category which made the government take action. ...read more.

There are more articles in magazines warning children and teenagers about the dangers of sun tanning without protection. This has also worked well as teenagers are the main age group who read magazines and use sun tanning equipment. This way I feel there will be a decreased number of teenagers using sunbeds and more chance of using protection. Researching about skin cancer has improved my knowledge on how dangerous skin cancer can be and how important it is to look after your body in the sun. I realise that skin cancer is a growing public health issue, and being pale myself, makes me aware I need to take great care when exposing myself in the sun. I have also been educated about what sun creams are best to use, what aren?t good to use, such as oils and no sun cream at all. Overall, I feel that skin cancer will still grow as the sunbed ban and education is still not good enough to stop young people from using them. Media is a big influence, depending on what magazine is read, as I have witnessed myself celebrities commenting on how good it is to be tanned. I have also recently seen more celebrities supporting the skin cancer awareness group such as Nicola Roberts, who was in the girl group ?girls aloud?, and has been a great role model in the media and influenced girls to go for ?the pale look?. I feel personally, the government could of made a better strategy, and could possibly make a better one in the future. Looking into the Australian ?Slip,Slap,Slop? campaign I feel that the UK didn?t take it into account or use it as a guideline, and therefore had a disappointing outcome with their strategies. I feel if they took the whole campaign into account and included the public they would have had a much better outcome and could possible reduce the amount of skin cancer sufferers. ...read more.