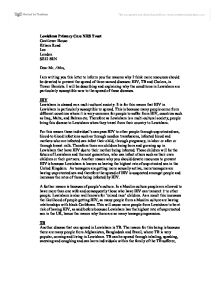 Lewisham Primary Care NHS Trust Cantilever House Eltham Road Lee London SE12 8RN Dear Mr. / Mrs, I am writing you this letter to inform you the reasons why I think more resources should be devoted to prevent the spread of three named diseases: HIV, TB and Cholera, in Tower Hamlets. I will be describing and explaining why the conditions in Lewisham are particularly susceptible now to the spread of these diseases. HIV Lewisham is classed as a multi-cultural society. It is for this reason that HIV in Lewisham is particularly susceptible to spread. This is because many people come from different countries where it is very common for people to suffer from HIV, countries such as Iraq, Malta, and Bahran etc. Therefore as Lewisham is a multi-cultural society, people bring this disease to Lewisham when they travel from their country to Lewisham. For this reason these individual's can pass HIV to other people through unprotected sex, blood-to-blood infections such as through needles transfusions, infected blood and mothers who are infected can infect their child, through pregnancy, in labor or after or through breast milk. Therefore there are children being born and growing up in Lewisham that have HIV due to their mother being infected. These children will be the future of Lewisham and the next generation, who can infect others such as their own children or their partners. ...read more.

This is another reason why I think more resources should be devoted to prevent the spread of TB. The worst thing is if this individual does not even know that they have TB, because they are able to transmit it to ten people a year and those individuals can continue the chain. Therefore I believe immediate action needs to be taken on account of this, before it spreads and becomes an epidemic. Cholera In the same way as the other diseases can be spread through people coming from other specific countries that are very well known for that particular disease to Lewisham, it is the same for people coming from countries such as Zimbabwe, Angola and Benin to Lewisham. People coming from these countries are usually poorer and less financially stable. Therefore this could lead to over crowding living conditions, where cholera can be spread. In conditions such as these that there is a cholera sufferer in the household, if people share cups, or don't change the towel in the toilet that they wash their hands on, then these people are at risk of getting cholera. Cholera can also be spread by contaminated water, such as tap water that is contaminated and if people do not boil it, if they drink they can get infected with cholera. ...read more.

They could also put individuals on antiretroviral which impede viruses like HIV. Secondly the money should be spent on vaccinations for TB. TB sufferers should also receive a letter or education about the importance of them completing their antibiotics; this can be done through the WHO program, which deals with attacking these problems and issues. Finally, for cholera the money should be spent highly on education. This would be through, adverts, documentaries, leaflets, letters, programs organized by the NHS etc. This would be to make them aware of the importance of washing their hands after going to the toilet or before they deal with food or water, to not eat raw or undercooked seafood and consequently it would impede the spread of cholera. This could be prevented by providing clean drinking water through water dispensers or water fountains in schools, colleges, universities or in work places. I strongly believe that the NHS budget should be increased, due to the things mentioned before. This could be done in acquiring more funds from the government or by simply charging individuals for health care services that could have been avoided. I would really appreciate it if you could get back to me as soon as possible and thank you for taking your time to read through this letter. I believe it will be very beneficial on the society and community not only now but for the further generations. Yours truly, Debora N'ganga ?? ?? ?? ?? ...read more.