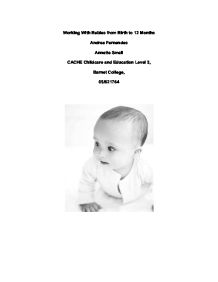 Summarise the factors which may influence the health and development of babies in the first year of their lives.

Working With Babies from Birth to 12 Months Andrea Fernandes Annette Small CACHE Childcare and Education Level 3, Barnet College, 09/621764 E1-Summarise the factors which may influence the health and development of babies in the first year of their lives. Environmental factors such as not having enough space in the garden for the baby to play and explore will influence their development as they may not be able to expand their gross and fine motor skills. "Generally people with a high level of earnings enjoy a better lifestyle, with better housing, better food, warm clothes and own transport" Meggit. C. (2001:10) Parents may not have enough money to fund for toys and equipment for the baby which means they will not benefit from experiences. On the other hand, babies who are raised in poverty are less likely to receive good nourishment and may live in unsuitable housing. Poverty therefore increases the likelihood of accidents and infections. Another factor is genetics which may influence the health and development of the baby. At the moment of conception when one sperm fuses with one egg information that will affect the baby's development comes together this information is known as DNA (deoxyribonucleicacid). DNA contains information that will influence our physical appearance, pre-disposition to illness. This is because some of the illnesses are inherited through genes for example, Downs Syndrome; this has been resulted from a chromosomal abnormality. This can lead the baby having problems such as heart defects and chest infections. Illnesses such as meningitis can cause epilepsy and hearing problems. Whilst asthma is long term and the baby may need to have asthma pumps. The baby may have poor appetite, constipation and may be feeling miserable, when they are ill. Their weight and height may be below average, if they have not been developing correctly due to illness. Babies are very vulnerable to infections because their immune systems are developing. ...read more.

Certification of play grounds used by children is ensured through consumer product safety commission. These regulations apply in the whole country and provide the basis for safe play ground installation and maintain ace practices (Wood, 2006). The parent also through the law has the obligation to care and protect the baby against any danger or harm. Ensuring the baby is well taken care of, under the right nutrition and immunization and well sheltered and loved is a requirement for every parent. Procedures used especially for adopted children are well stipulated in every country and several regulations must be followed like the age of the guardian, health status and relationship with the baby. The entire above are aimed at providing the best and safe environment t the baby, leaving the baby under the care of the right person, ensuring the baby if free form diseases and infections, and even giving a safe play ground for their development. Policies to ensure children centers or people handling babies are well trained are also exercised in many countries. A skilled carer will help make them realize their wellbeing, and self-confidence. The physical well being contributes to the child's ability to concentrate, cooperate and learn. To support children learning, the practitioners should give warm, trusting relationships, predictable, and safe environments (Bronfenbrenner, 2009). In addition, recognizing the signs of abuse in a baby are also an important procedure, this is due to the baby not being able to talk and to tell the practitioner what is wrong. Moreover so they can then go to the designated safeguarding officer immediately to prevent the abuse or stop it, if it is happening. The Every Child Matters initiative which is part of the Children Act 2004, states that all children should stay safe. Record keeping is imperative, as you can also see the changes in the baby's development. The parents' name, address and phone number should be documented, in case of an emergency. ...read more.

This is a very good essay but a little disorganised in places. The writer needs to try to talk in PIES when discussing factors that affect development.

The writer has discussed some theorists but it is rather vague and the work could be expanded by trying to apply the ideas to the setting. There are lots of opportunities for extending the work throughout, simply through developing explanations and adding examples.