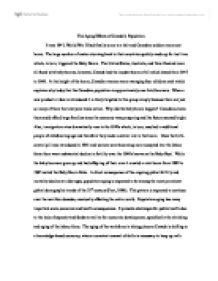 The Aging Effects of Canada's Population

The Aging Effects of Canada's Population It was 1947, World War II had finally come to a halt and Canadian soldiers were sent home. The large number of males returning back to their countries quickly made up for lost time which, in turn, triggered the Baby Boom. The United States, Australia, and New Zealand were all faced with baby booms; however, Canada had the loudest boom of all which lasted from 1947 to 1966. At the height of the boom, Canadian women were averaging four children each which explains why today that the Canadian population is approximately one-third boomers. When a new product or idea is introduced it is likely targeted to this group simply because there are just so many of them that everyone takes notice. Why did the baby boom happen? Canadians knew they could afford large families since the economy was prospering and the future seemed bright. Also, immigration rates dramatically rose in the 1950s which, in turn, resulted in additional people of childbearing age and therefore they made a central role in the boom. Once the birth-control pill was introduced in 1961 and women were becoming more accepted into the labour force there was a substantial decline in fertility over the 1960s known as the Baby Bust. While the baby boomers grew up and had offspring of their own it created a mini boom from 1980 to 1995 called the Baby Boom Echo. A direct consequence of the ongoing global fertility and mortality decline at older ages, population aging is expected to be among the most prominent global demographic trends of the 21st century (Foot, 1996). ...read more.

There is now a greater demand for workers with university educations opposed to apprentice training (Exhibit 2). This factor has made a large impact in such that many of the older workers have become obsolete due to their lack of education and ability to perform highly-skilled tasks. The aging population poses a serious labour demand issue for the future. Beginning in 2010, the proportion of the population aged 65 and over will expand rapidly, reinforced by a low birth rate and a longer life expectancy. In 2001, those aged 37 to 55 made up 47% of the labour force. In 2011, half of them will be 55 or over, and 18% of them will be over the age of 60. The 2002 General Social Survey found that the quality of work and the uncertainty of unemployment are significant aspects that the elderly take into consideration when contemplating retirement (Exhibit 3). The percentage employed, by both males and females in the 55-69 age group, seem to be hitting a common plateau between 32% for females and 50% for males. This trend is projected to not fluctuate as early retirement is on the rise due to the improvements in the economy in recent years. An aging work force may have a bigger impact on some occupations than others. University and college professors are also older, on average, than the overall labour force. In 2001, almost 29% of professors were aged 55 and over, much higher than the proportion of only 19% a decade earlier. In 2001, more than 17% of college teachers were aged 55 and over compared with less than 11% in 1991 (Public Health Agency of Canada, 2005). ...read more.

Some are married, some divorced, some widowed. Some live in urban areas, some in rural areas. Some are 65, some 95. Because seniors differ so much in their situations and lifestyles, they differ in their needs. The challenge in providing services for Canada's growing population of older citizens, whether in the field of housing, traditional medical services or community social services, is to meet those needs through the widest range of options. Canada's success in grappling with that challenge will eventually affect the lives of all Canadians. In just over three decades the baby boomers will be 65 and older, and the fraction of the older population will be far greater than previously experienced in Canada, or indeed in any modern industrial nation. That prospect has given rise to major concerns about our ability as a society to meet the large anticipated changes that will affect the economy. The labour force will shrink and in turn cause a serious labour demand issue in which Canada must find a way to cope with in roder to function properly. Canada's health care system will be facing increased financial pressures int eh near future, and the system must be properly structured in order to deal with not only the aging of the population but the changing increases in life expectancy. A balanced view is required so that attention be given to all publicly provided services, not only to those services used in large measure by the elderly, and also to privately provided goods and services, since the costs must be charged against the same national income in both cases. Canada's changing demographic state is a natural process and we must take all factors into account when decided how to best facilitate our nation today and even more so in the future. ...read more.