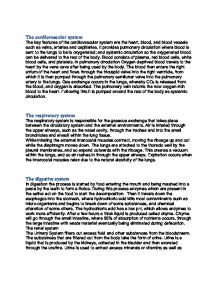 The cardiovascular system The key features of the cardiovascular system are the heart, blood, and blood vessels such as veins, arteries and capillaries. It provides pulmonary circulation where blood is sent to the lungs to be is oxygenated; and systemic circulation so the oxygenated blood can be delivered to the rest of the body. Blood consists of plasma, red blood cells, white blood cells, and platelets. in pulmonary circulation Oxygen deprived blood travels to the heart by the vena cava after being used by the body. The blood then enters the right atrium of the heart and flows through the tricuspid valve into the right ventricle, from which it is then pumped through the pulmonary semilunar valve into the pulmonary artery to the lungs. Gas exchange occurs in the lungs, whereby CO2 is released from the blood, and oxygen is absorbed. The pulmonary vein returns the now oxygen-rich blood to the heart. Following this it is pumped around the rest of the body as systemic circulation. ...read more.

The hydrochloric acid has a low pH, which allows enzymes to work more efficiently. After a few hours a thick liquid is produced called chyme. Chyme will go through the small intestine, where 95% of absorption of nutrients occurs, through the large intestine with waste material eventually being eliminated during defecation. The renal system The Urinary System filters out excess fluid and other substances from the bloodstream. The substances that are filtered out from the body take the form of urine. Urine is a liquid that is produced by the kidneys, collected in the bladder and then excreted through the urethra. Urine is used to extract excess minerals or vitamins as well as dead blood cells from the body. The Urinary organs include the kidneys, ureters, bladder, and urethra. The Nervous system The nervous system is a network of specialized cells called neurons that transmit signals between different parts of its body The central nervous system contains the brain, spinal cord, and retina. ...read more.

The muscular system The muscular system is consists of three types of muscles; skeletal, smooth and cardiac muscles. It permits the control and movement of the body, maintains posture and structure and also circulates blood throughout the body. The muscular system in is controlled through the nervous system, although some muscles can be completely autonomous such as cardiac muscles. The Skeletal system The human skeleton consists of fused, such as the pelvis and the cranium, and individual bones, such as the Hyoid bone, which is located in the neck and serves as the point of attachment for the tongue, which are supported and supplemented by ligaments, tendons, muscles and cartilage. Some bones such as the Hyoid bone do not connect with other bones in the body but is supported by muscles and ligaments instead. The immune system The immune system consists of biological structures that protects against disease. In order to function properly, the immune system must detect a wide variety of pathogens and distinguish them from healthy tissue and helpful bacteria. ...read more.

A nice essay that discusses the main systems of the body. It is short and concise and would be an ideal starter piece to extend and build upon.

The writer has included the basics and there is ample opportunity to extend and add further detail. I feel that the work would benefit from some diagrams to show the major organs and put the systems into context.