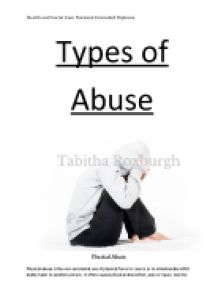 Types and Signs of Abuse

Transfer-Encoding: chunked ﻿Health and Social Care National Extended Diploma signs_and_types_of_abuse Physical Abuse Physical abuse is the non-accidental use of physical force to coerce or to intentionally inflict bodily harm to another person. It often causes physical discomfort, pain or injury, but the person affected does not have to have an injury to have experienced physical abuse. Physical abuse may include, for example: * Beating the person * Punching or slapping http://worldartsme.com/images/hulk-fist-punch-clipart-1.jpg * Burning or scalding * Pushing or shoving * Hitting with a hand or instrument or slapping * Rough handling or physical coercion * Stabbing with an object * Tripping them over * Spitting on them * Tying them to furniture * Using or misusing physical restraints * Restraining them through the use of alcohol, tranquillizers or other medication * Forcing them to remain in beds or chairs * Forcing them to remain in rooms (including locking them in) Caring for someone who is frail or who has special needs can be very stressful. In many cases, other contributory factors are also present and this additional stress on the carer appears to be the factor that triggers the abuse. The following factors may contribute to an abusive relationship: * Financial difficulties * Lack of respite care * Inadequate support to give high quality care * Heavy physical or emotional cost of the carer * Lack of recognition for the role?affecting health and wellbeing of carer * Personal stress, i.e. looking after an adult as well as own children * Unfamiliarity with the role of caring for someone and the responsibilities involved. Many reasons can cause this type of abuse. For example, the abuser may suffer with a mental illness or they had a difficult growing up as a child and they were not taught their primary socialisation skills. The abuser may be angry and upset and they like to take it out on other people to make them understand how they feel. ...read more.

transplants * To gain materialistic items from a vulnerable person Signs & symptoms of exploitation: * Sudden decrease in bank account balances * Unexplained disappearance of money or valuable possessions * Sudden problem paying bills or buying food to provide for your family and yourself * Substandard care being provided or bills which are late or unpaid despite the availability of adequate financial resources * Concerns expressed by a person with a developmental disability that he or she is being exploited One thing that can cause this abuse is if the abuser is an alcoholic, they are spending all their money on alcohol and won?t be able to pay for food or bills. Another example is a care giver might go down to the shop for the elderly and steal their money for themselves and the elderly notice that their bank account is going down very quickly. http://photos.gograph.com/thumbs/CSP/CSP909/k9097066.jpg Discriminatory Abuse Discrimination is defined as a form of an equality act or prejudicial treatment to different categories of people. Discriminatory abuse is motivated by oppressive and prejudicial attitudes towards a person's disability (including physical or sensory impairment, learning difficulty or mental ill-health), their age, race, gender, religion, cultural background, sexual orientation etc. * Discrimination demonstrated on any grounds including sex, race, colour, language, culture, religion, politics or sexual orientation. * Discrimination that is based on a person's disability or age * Harassment and slurs which are degrading * Hate crime Signs & symptoms of discriminatory abuse: * Tendency to withdrawal and isolation * Fearfulness and anxiety * Being refused access to services or being excluded inappropriately * Loss of self-esteem * Resistance or refusal to access services that are required to meet need * Expressions of anger or frustration * Not being provided a service because they can?t handle an individual?s disability * A lot of illness due to lack of medical care because of gender * Isolate themselves and are conscious to go outside * Criminal damage to their belongings * Verbal abuse in ...read more.

For example, taking an overdose and seeing whether or not it does enough damage to kill them, or cutting deeply on an area above a vein and see later whether they hit a vein or not. Bullying A bully is someone who uses their superior strength or influence to intimidate someone else, typically to force them to do something. Bullying is unwanted, aggressive behaviour among all people that involves a real or perceived power imbalance. * Physical bullying: Victim is touched or hit without consent or their property is purposely stolen or destroyed. * Verbal bullying: Victim is verbally and directly called names and insulted. * Cyber-bullying: Victim is targeted online, sometimes anonymously and other times via public humiliation i.e. a video of the victim posted online without consent. * Social bullying: Bully tries to destroy a victim's reputation or relationship with another person or organization. * Cyber harassment: When an adult bullies a child online. Signs and symptoms of bullying: * Yelling or swearing * Name calling or insults, mocking others and/or siblings * Threats and intimidation * Ignoring or excluding * Isolating * Humiliating * Denial of the abuse and blaming of the victim * Anxiety * Not wanting to go to work or socialise with friends The abuser may have had difficulty growing up and doesn?t understand his or hers emotions on a personal level. This leads to insecurities and anxiety later on in life. The abuser could be getting bullied themselves and haven't told anyone about their abuse, they could be bottling up their emotions and taking it out one somebody else. Kids who are bullied are more likely to experience: Depression and anxiety, increased feelings of sadness and loneliness, changes in sleep and eating patterns, and loss of interest in activities they used to enjoy. These issues may persist into adulthood and later turn in health complaints. The abuser may feel lonely and just want some attention, they may be jealous of their victim which could lead to low self-esteem problems. http://images.clipartpanda.com/suffering-clipart-royalty-free-depression-clipart-illustration-1053973.jpg ...read more.