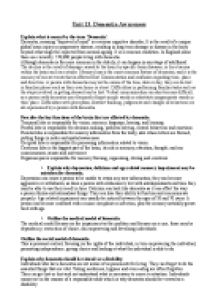 ﻿Unit 13. Dementia Awareness Explain what is meant by the term 'Dementia'. Dementia, meaning ?deprived of mind? is a serious cognitive disorder, It is the result of a unique global brain injury or progressive disease, resulting in long-term damage or disease in the body beyond what might be expected from normal ageing. It is a common condition. In England alone there are currently 570,000 people living with dementia. Although dementia is far more common in the elderly, it can happen in any stage of adulthood. The decline is the result of damage caused to the brain by specific brain diseases, or by a trauma within the brain such as a stroke. Memory loss is the most common feature of dementia, and it is the memory of recent events that is affected first. Disorientation and confusion regarding time, place and direction. A person with dementia may not be aware of the time, date or day, they can be lost in familiar places such as their own home or street. Difficulties in performing familiar tasks such as the steps involved in getting dressed can be lost. Verbal communication can also become difficult, as a person with dementia may frequently forget simple words or substitute inappropriate words in their place. ...read more.

Although Parkinson's disease is more common in older people, 1 out of every 20 people diagnosed in the UK are under 40. Studies indicate that the longer a person has lived with Parkinson's disease, the more likely it is they will experience some form of cognitive impairment. Describe how different individuals may experience living with dementia depending on age, type of dementia and level of ability or disability. People who are living with dementia in earlier age such as 60's-70's are less dependable than people living with dementia at the age of over 70's or 80's. People have different stamina in different ages, so the ability and disability fluctuated and level of support are varied as well. Outline the impact that the attitudes and behaviours of others may have on an individual with dementia. Individuals with dementia need routine in their life, if their routine is disrupted by others it could affect how they live. It could also effect their self esteem and if the carer did not understand that the individual needs routine and structure in place it can be dangerous which can the lead to the carer shouting at the person or other forms of abuse, also without support mechanisms in place the individual with dementia would lose the ability to function and could therefore speed up their deterioration of the disease. ...read more.