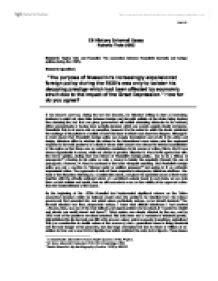 &amp;#147;The purpose of Mussolini&amp;#146;s increasingly expansionist foreign policy during the 1930&amp;#146;s was only to bolster his decaying prestige which had been affected by economic strain due to the impact of the Great Depression.&amp;#148; How far do you agre

IB History Internal Essay Roberto Thais U6B3 Research Topic: Italy and Mussolini: The connection between Mussolini's domestic and foreign policies during the 1930's. Research Question: "The purpose of Mussolini's increasingly expansionist foreign policy during the 1930's was only to bolster his decaying prestige which had been affected by economic strain due to the impact of the Great Depression." How far do you agree? It has become common, during the last few decades, for historical writing to show an increasing tendency to point out close links between foreign and domestic policies of the states being treated, thus stressing the fact that any given government will exhibit underlying intricacies in its methods, either unconsciously or having been carefully planned, which any careful analysis should not ignore. Mussolini's Italy is of course not an exception, however it is the extent in which the leader calculated the workings of his policies in a holistic manner the issue in which most observers disagree. Although it is much clearer that Mussolini's foreign policy was largely inconsistent and erratic in its action and design, historians differ in whether his actions in the international arena where only the unplanned response to domestic problems of a dictator whose chief concern was always the internal consolidation of his regime or that there was an underlying consistency in his course of action, this is, that it was always expansionist in nature, while not always in practice. Historian D. Mack Smith agrees that with the former opinion, stating that "any history of Mussolini's foreign policy... has to be a history of propaganda"1 referring to his policy as only a means to bolster his popularity through the use of propaganda. However, M. Knox is convinced of the latter viewpoint asserting that Mussolini's foreign policy was not a reaction to "internal social or political pressures"2 but seeing in it an authentic expansionist vision. The arguments of both of these respected contemporary historians shall form the basis of the discussion following to a considerable extent, and given the ...read more.

However, Mussolini's actual success in solving the economic problems he encountered before 1930 can be regarded in two levels. In the level of individual economical circumstances (probably the one Mussolini planned his policies in, hence showing his primordial interest for "instant remedy rather than the achievement of a grand design"6 when considering a new plan) his policies were to a considerable extent successful in solving some the problems he inherited, for instance, industrial growth run down and inflation. However, as a whole, Italy's major problems (dualism, poverty, unemployment and land hunger of the peasantry), which happen to be problems involving more than one system hence requiring careful coordination, were aggravated. This aggravation was due to the manner in which individual problems were solved: the insensible substitution of a problem with another. This can clearly be seen for example in the inflation problem (solved but replaced by recession) and low levels of industrial and agricultural growth (solved but replaced with increased dualism). The nature of his solutions formed the basis for his decaying prestige due to the economic strain caused by the Great Depression, since, as it is natural, any short term remedy without an authentic purpose will succumb before a radical change of circumstances, and also constitutes the main link between the nature of the domestic and foreign policies. Being more precise, this connection is most clearly pinpointed as propaganda. Following D. Mack Smith's argument, Mussolini's target when engaging in his increasingly expansionistic foreign policy during the 1930's was the same as that pursued by his internal policies, as we have identified: popular recognition. A clear parallel thus emerges which follows a logical pattern, for when Mussolini realized that his domestic economical strategies where failing due to his initial lack of vision underlined by the crisis of the Great Depression he turned to the international arena as the main priority, which had remained much calmer, at least in what official propaganda and Mussolini's declarations to foreign powers was concerned. ...read more.

for the country and for him in an early stage, not considering enough the feasibility of a truly successful enterprise as the best interests of Italy were laid aside for the prospect of an inexpensive, quick and glorious victory. The consequences of the attack on Ethiopia was that Mussolini was left only with one ally, Germany, as Britain and France had to condemn the actions because of their membership of the league of nations. Therefore from this point on Italy was invariably tied to Germany and to its own expansionism, this led Mussolini to get involved in an extremely unsuccessful campaign in the Spanish Civil War and eventually in the Second World War, thus his expansionism after the campaign in Ethiopia cannot be regarded as genuine and authentic as it was only the result of Italy's obligation to accept and imitate Hitler's desires for Lebensraum in order not to remain ally-less. Therefore we can conclude that indeed, the increasing expansionistic ideals of Mussolini during the 1930's where only a means to bolster his prestige and furthermore that we cannot talk of a true and authentic and consistent vision of expansionism of having been present in fascist Italy. This consistency is only an illusion, if indeed a true consistency is to be found on his regime is that of opportunism reinforced with appropriate propaganda, that of achieving popularity at any cost. Expansionism and, more broadly, the struggle of the Italian people (pictured in both the Battle for births and grain), form part of a single ingredient of Mussolini's propaganda machinery since, as we have seen, they do not constitute an ideology or doctrine themselves at the level at we may talk of fascism being a doctrine. Furthermore we have seen that fascism does not even form itself a concrete set of guidelines, but is better identified as a technique to achieve power and recognition, a technique based on inconsistency and transformism that eventually led the regime to come tumbling down to an end. 2952 words. ...read more.