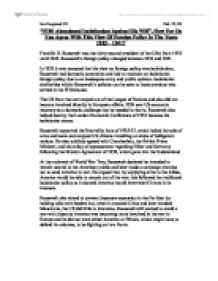 FDR Abandoned Isolationism Against His Will, How Far Do You Agree With This View Of Foreign Policy In The Years 1933 &quot; 1941?

"FDR Abandoned Isolationism Against His Will", How Far Do You Agree With This View Of Foreign Policy In The Years 1933 - 1941? Franklin D. Roosevelt was the thirty second president of the USA from 1933 until 1945. Roosevelt's foreign policy changed between 1933 and 1941. In 1933 it was accepted that his view on foreign policy was isolationism, Roosevelt had domestic constraints and had to maintain an isolationist foreign policy due to an inadequate army and public opinion. Isolationist similarities within Roosevelt's policies can be seen to those previous who served in the Whitehouse. The US from the start stayed out of the League of Nations and also did not become involved directly in European affairs. FDR saw US economic recovery as a domestic challenge that he needed to rise to. Roosevelt also helped destroy the London Economic Conference of 1933 because his isolationist stance. ...read more.

Roosevelt started to accept a more interventionist approach once the dictators became overtly expansionist: such as Mussolini in Ethiopia but, more importantly, Hitler in Austria and Czechoslovakia. Even after the German invasion of Poland, in 1939, FDR would not commit the US to the Allied cause other than allowing economic aid through Cash and Carry and later Lend Lease. He believed that the US should play a key role in foreign affairs in order to defend democracy and human rights around the world. Roosevelt thought that America should be involved in the League of Nations, even though the public and the Senate had refused to ratify its participation. He saw the policy of appeasement by the British government toward Germany only as delaying war. He pushed Congress for air force and naval expansion and organised military talks to prepare for war. Following German and Japanese expansion, Roosevelt made a speech advocating the 'quarantine' of aggressive nations, with some historians believing it to be a sign of a change in US foreign policy. ...read more.

previous presidents saw this way and that public opinion was in favor of Isolationism to aid America in economic growth during the great depression. However his changing policies occurred to try and keep up with what the people and the Congress wanted or expected. I do not believe that to the full extent Roosevelt didn't have the power to turn and oppose those who were trying to force him to abandon isolationism, yet he did it on his own, for what was best for the US and the recovery from the Great Depression and the Wall St. Crash. To some extent he was forced to give up isolationism to move with the times, but he had to have a motive to not want to fight for isolationism. Roosevelt must have known that abandoning isolationism was the way forward and that interventionism was the new policy to introduce ready for the 'New Deal' policy later. ?? ?? ?? ?? Jon Coupland G3 Feb. 22, 09 ...read more.