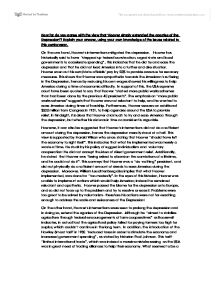 How far do you agree with the view that Hoover simply extended the agonies of the Depression?

How far do you agree with the view that 'Hoover simply extended the agonies of the Depression'? Explain your answer, using your own knowledge of the issues related to this controversy. On the one hand, Hoover's interventions mitigated the depression. Hoover has historically said to have "stepped up federal construction, urged state and local governments to accelerate spending", this indicates that he did try and ease the depression and that he did not lead America into a further and dire situation. Hoover even cut his own/state officials' pay by 20% to provide revenue for recovery measures. This shows that Hoover was sympathetic towards the American's suffering in the Depression, hence by reducing his own wages showed his willingness to help America during a time of economic difficulty. In support of this, the USA supreme court have been quoted to say that Hoover "started more public works schemes than had been done by the previous 40 presidents". ...read more.

Additionally, he stated that Hoover was "being asked to abandon the convictions of a lifetime, and he could not do it". This conveys that Hoover was a "do-nothing" president, and did not physically do a sufficient amount of deeds to ease America during the depression. Moreover, William Leuchtenberg also implies that what Hoover implemented, was done far "too modestly". In the eyes of this historian, Hoover was unable to implement actions which would help America; instead he remained reluctant and apathetic. Hoover passed the blame for the depression onto Europe, and so did not face up to the problem and try to resolve or ease it. Problems were too great to be solved by voluntarism- therefore his actions were not far-reaching enough to address the scale and seriousness of the Depression! On the other hand, Hoover's interventions were seen to prolong the depression and in doing so, extend the agonies of the Depression. ...read more.

It seemed as though the "inconsistencies in Hoover's policies" made the depression "even worse" as stated by Roosevelt. Furthermore, the Federal Home Loan Bank Act in July 1932 was invented to save mortgages by making credit easier, however mortgages were collapsing due to banks going bust. This was evidently pointless and led the US into further agonies of the depression. The reconstruction finance corporation offered "too little too late"-he made it impossible for people to take help. Therefore, it's plain to suggest that Hoover simply extended the agonies of the depression, in which he was not able to relieve any of the problems suffered by the American nation. USA went from being one of the richest countries in the world, to one that saw a plummet in world assets and wealth. If anything, his policies can been seen to have been a long term catalyst in relief, but it was inadequate for short term satisfaction. ?? ?? ?? ?? ...read more.

The student answers the question very well by presenting two different interpretations of Hoover's presidency, which is good because it shows that the student is capable of thinking broadly and finding more than one opinion about the same event. The ...

The student answers the question very well by presenting two different interpretations of Hoover's presidency, which is good because it shows that the student is capable of thinking broadly and finding more than one opinion about the same event. The essay is unusual in that it has no introduction: an introduction isn't necessary, but it would give the student an opportunity to summarise the argument they were about to make, so that they didn't lose focus on answering the question further on in the essay.

The range of evidence used is very good. In particular, using statistics such as "an additional $500 million from Congress" is good: some students would simply say "he secured more money from Congress" and this would be meaningless because it could be a very small and insignificant amount of money. But by quoting the actual figure, this student is showing they recognise that $500m is a significant amount of money for a president to get. The student engages with the sources by quoting historians, which is good because it shows they can find the parts of what other people have said that are relevant to their own argument. A particularly good aspect of this is the way that they quote a full sentence and then zoom in to the most useful bits - such as "The emphasis on Ã¢â‚¬Å“more public works schemesÃ¢â‚¬Â suggests..." - and then go on to analyse. This shows that they understand enough of what the historian is saying to decide which bits are most relevant. The analysis is excellent. Some students fall into the trap of telling a story instead of explaining why and how things happened, but this student avoids it. When saying "the Federal Home Loan Bank Act in July 1932 was invented to save mortgages by making credit easier...This was evidently pointless", a weaker student might have used three or four sentences describing what was in the Federal Home Loan Bank Act, but by saying it was "evidently pointless", this student has reached a judgement. This shows the student can understand more than details because by saying it was pointless, they have spotted a disadvantage of the argument. It is always good to try to get a sentence full of facts and then a sentence full of discussion of the cause and effect of that fact, as this shows you have the knowledge as well as the understanding, and you need both to reach high marks. The conclusion to this essay is also very good as it summarises the argument, which shows that the student is able to organise their knowledge and pick out the advantages of the opinion they agree with. Also, by saying "...a long term catalyst in relief, but it was inadequate for short term satisfaction", the student is showing that a historical event can have some effects straight away, but different effects over time. This shows that they haven't just revised the standard stuff their teacher has taught them on Hoover's presidency, but they also understand general twentieth century American history. Check the library or Internet and learn three or four facts about the decade before and after the period you are studying, and make sure they are relevant (for example, if you study economic history like this student, make sure the facts are economic). It will show the examiner you've read around the subject, and you know how one event you have been taught links to one you've read yourself.

This is the weakest section of the essay. At some points, the student's meaning isn't clear: "Hoover has historically said to have Ã¢â‚¬Å“stepped up... " could either mean that the quote was directly from Hoover himself, or it's something that has been said about him. This confusion makes it look like the candidate isn't clear on their understanding of the source, even though it is a writing mistake and they probably are. Always re-read your essay afterwards and check to see that it makes sense. It is good that the student uses phrases like "...is arguable", because it shows they understand that events can be interpreted in different ways. However, the essay would benefit from some more technical vocabulary: instead of "...hence the depression merely stood at a halt", they could maybe say "as a consequence, the depression..." because the word "consequence" often appears in mark schemes and it shows a solid understanding of the effect that one historical event can have on another.