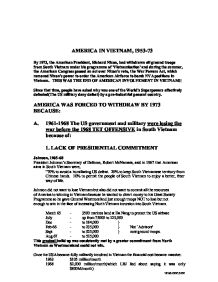 AMERICA IN VIETNAM, 1953-73 By 1973, the American President, Richard Nixon, had withdrawn all ground troops from South Vietnam under his programme of 'Vietnamisation' and during the summer, the American Congress passed an act over Nixon's veto, the War Powers Act, which removed Nixon's power to order the American Airforce to b**b NVA positions in Vietnam. THIS WAS THE END OF AMERICAN INVOLVEMENT IN VIETNAM!! Since that time, people have asked why was one of the World's Superpowers effectively defeated(The US military deny defeat) by a pre-industrial peasant country. AMERICA WAS FORCED TO WITHDRAW BY 1973 BECAUSE: A. 1961-1968 The US government and military were losing the war before the 1968 TET OFFENSIVE in South Vietnam because of: 1. LACK OF PRESIDENTIAL COMMITMENT Johnson, 1965-68 President Johnson's Secretary of Defence, Robert McNamara, said in 1967 that American aims in South Vietnam were, "70% to avoid a humiliating US defeat. 20% to keep South Vietnamese territory from Chinese hands. 10% to permit the people of South Vietnam to enjoy a better, freer way of life. Johnson did not want to lose Vietnam but also did not want to commit all the resources of America to winning in Vietnam because he wanted to divert money to his Great Society Programme so he gave General Westmoreland just enough troops NOT to lose but not enough to win in the face of increasing North Vietnam incursion into South Vietnam. March 65 - 3500 marines land at Da Nang to protect the US airbase July - up from 75000 to 125,000 Dec - to 184,000 } Feb 66 - to 235,000 } Not `Advisors' Sept - to 325,000 } now ground troops. Aug 67 - to 525,000 This gradual build up was consistently met by a greater commitment from North Vietnam so Westmoreland could not win. Once the USA became fully militarily involved in Vietnam the financial cost became massive: 1963 $105 million/month 1968 $2,000 million/month(which LBJ lied about saying it was only $800M/month) ...read more.

When the trail was first laid it took 6 months to travel along it. By the height of the War it took only 6 weeks. 50, 000 women worked to repair the bombing damage to the Trail and the American bombing almost never stopped the movement of war materials to South Vietnam. By 1964 the trail was highly efficient and men and materials were departing from organised depots. Over 25,000 soldiers guarded the trail, which the Americans considered too dangerous to attack on the ground and so relied on attacking it from the air. 50,000 labourers worked on keeping the trail clear and youth groups were called in to repair the road after bombing raids. The route was never cut. In 1965, 35,000 North Vietnam troops moved south. In 1968, 130,000 moved south. The trail defenders grew their own food. There was strict military discipline over meal times and rationing. Their camps had their own medics and some even printed newspapers. American soldiers in Vietnam suspected that American military commanders did not believe how huge and advanced the trail was. By 1967, 60 tonnes of supplies a day were being delivered to the south and 10,000 trucks were using the trail at any 1 time. Tactics The Vietcong introduced a new tactic in 1966 after losing a battle in the Spring of 1965 at Pleiku in which a battalion of NVA were destroyed by the first time use of Huey helicopters in battle. This new tactic was called "grab them by the belt buckle". The aim was to try to engage US troops at very short distances so that if the US used helicopters to drop bombs on the Vietcong, Americans would also die. From 1966 to 1972 95% of all battles and attacks were initiated by the VC and NVA and almost always at very close quarters. B. 1968-1973 After the shock of the TET OFFENSIVE the American people lost confidence in their government's policy in Vietnam and began to question American involvement which led to growing opposition because: 1. ...read more.

As the Fulbright hearings were getting underway administrative officials were responding to another annoying outburst of establishment opposition to the War. In late January the "lawyers committee on American policy towards Vietnam", claiming 4,000 members released a letter to the press challenging the legality of US intervention in Vietnam the shock and surprise of all and then began peace negotiations. December 1970 Congress voted to repeal the Gulf of Tonkin Resolution but Nixon chose to ignore Congress by arguing he had a duty to protect the ground troops still in South Vietnam. 1971 The 26th Constitutional amendment was made which gave the right to vote to all citizens over the age of eighteen years which was the age of the student protesters and of the men who were being drafted to fight in Vietnam. These new voters voted for the first time in the elections for Congress in November 1972. Congress became increasingly anti-war after this election. 1973 July congress in response to Nixon's lengthy and continual illegal bombing activities in Cambodia passed the War Powers Act over Nixon's veto on November 7 1973. This equals an end to all bombing in South East Asia and no new military operations unless Congress approved in every instance. The President had to consult the Congress before sending American forces into foreign countries or present a report to Congress justifying military deployment within 48 hours and to withdraw troops after 60 days unless Congress specifically said otherwise. April 1974 refused Nixon's request for $474 Million July 1974 Congress began impeachment proceedings against Nixon for illegal activities during the 1972 election(Watergate break-in and cover up). August 6, 1974 aid to South Vietnam limited to $700 Million down from the requested $1600 Million August 8, 1974 Richard Nixon resigned the Presidency to avoid impeachment and Vice President Gerald Ford took over Nixon's policy for S.E.Asia. March 1975 rejected President Ford's request for $500 Million for SV April 1975 rejected President Ford's request for $700 Million ?? ?? ?? ?? 12198.DOC.DOC ...read more.