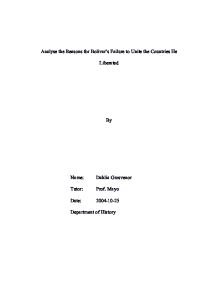 Analyse the Reasons for Bolivar's Failure to Unite the Countries He Liberated By Name: Dahlia Grosvenor Tutor: Prof. Mayo Date: 2004-10-25 Department of History Simon Bolivar, often referred to as 'the Liberator', was directly responsible for the freedom of many of the Latin American states. His dream for the future of the newly liberated states was to become a great confederation, to become a united body. He believed that his popularity as liberator would make it easier to impress his ideas upon the peoples and obtain their support of his grand scheme. Unfortunately for Bolivar, there were to be many disheartening realities that he could no longer avoid, which would result in the failure of his dreams. It was Bolivar's hope and ambition to unite the South American republics into a strong confederation. To this end, the congress that met at Panama in 1827 was to be a union to counteract the influence of the Holy Alliance and defend against the principles of hegemony, which were beginning to be outlined by the United States. It was he who set in motion the objective of establishing an international code for the Latin American Republics. The example of Napoleon led him into acts too arbitrary and a policy too autocratic to please the independent temper of his compatriots. Bolivar was not as successful as a political leader as he was as a General. ...read more.

He then planned to unite all the countries of the South into a Federation of the Andes, with himself as president and with the Bolivian constitution as the permanent basis of government. In 1815, even Bolivar, himself, comments on the difficult nature of controlling such a vast territory. "A state too extensive, either in itself, or on account of its dependencies, finally falls into decadence and converts its free form of government into tyranny, weakening the principles which should preserve it and finally relapsing into a despotism.... A large monarchy is hard to consolidate and a large republic is impossible."1 However, he still tries a decade later to do the impossible; failure was inevitable. Geographical problems were furthermore accentuated by the individualism of race and national differences. Each nation was different and there was much conflict between the states. Yet he expected that the states all come together under one flag, one army and be one nation under one constitution. He expected Colombia, Peru and Bolivia to come together under the Bolivian constitution, which would cause for rivalries between the Colombians and the Peruvians to arise. With a federation this large, it would inadvertently bring out the predominance of one section over the others. With the many conflicting differences among each other, it would be impossible for one country to submit itself to another. ...read more.

Unfortunately, Bolivar was hundreds of miles away from Bogot� when he learned of their plans. At this time, the Venezuelans, under Paez, used this monarchical proposition as a pretext for their own rebellion. Paez decided to go ahead with his plans as he realized also that Bolivar was ill and far away. A new congress elected in 1830 accepted the secession of Venezuela and, soon thereafter, of Ecuador. Bolivar finally realized that his goal was unattainable and was harshly confirmed when he was exiled form his own country. In conclusion, one realises that there were a varying number of factors that contributed to Bolivar's failure to unite the Latin American States. These reasons however branch off of two specific factors. Firstly, Bolivar refused to accept the states' newfound nationalism as a strong and important factor, to understand the differences among the states. This showed in the elites' unwillingness to accept Bolivar's grand plans for their independent nations. Secondly, Bolivar, against his earlier judgement attempted to manage a republic over too vast a geographical area. As he could not be everywhere at once, his large republic became increasingly difficult to maintain. Eventually this led to individuals acting freely in his absence. Though Bolivar was quite a humble gentleman, he allowed those around him to persuade him that his popularity as 'liberator' would allow him to be successful in his plans. 1 Belaunde, Victor A. Bolivar and the Political Thought of the Spanish American Revolution, 1967. ?? ?? ?? ?? ...read more.