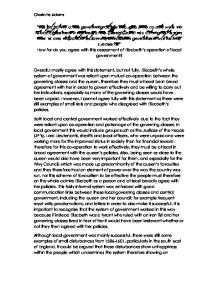 “The majority of the governing classes throughout the country were in broad agreement with most of the queen’s policies during her reign. This is one important reason why Elizabeth’s government was mainly successful.”
How far do you agree with this assessment of Elizabeth’s operation of local government?

Overall, I mostly agree with this statement, but not fully. Elizabeth’s whole system of government was reliant upon mutual co-operation between the governing classes and the queen, therefore they must at least be in broad agreement with her in order to govern effectively and be willing to carry out her instructions, especially as many of the governing classes would have been unpaid. However, I cannot agree fully with this statement as there were still examples of small riots and people who disagreed with Elizabeth’s policies.

Both local and central government worked effectively due to the fact they were reliant upon co-operation and patronage of the governing classes. In local government this would include groups such as the Justices of the Peace (JP’s), Lord Lieutenants, sheriffs and local officers, who were unpaid and were working more for the improved status in society than for financial reward. Therefore for this co-operation to work effectively, they must be at least in broad agreement with the queen’s policies. Also, being seen as close to the queen would also have been very important for them, and especially for the Privy Council, which was made up predominantly of the queen’s favourites and they therefore had an element of power over the way the country was run. For this scheme of favouritism to be effective the people must therefore on the whole admire Elizabeth as a person and at least broadly agree with her policies. This fairly informal system was enforced with good communication links between these local governing classes and central government, including the queen and her council; for example frequent royal writs, proclamations, and letters in order to also make it successful. It is important to recognise that the system of government worked in this way because if instead Elizabeth was a tyrant who ruled with an iron fist and her governing classes lived in fear of her it would have been irrelevant whether or not they then agreed with her policies.

Although local government was mainly successful, there were still some examples of small disturbances from 1586-1601, particularly in the south east of England. It could be argued that these disturbances show unhappiness within the people which undermines the system therefore showing an unsuccessful and inefficient government. However, these were very small and local issues, often centring on food shortages or opposition towards enclosure. Therefore they would not have been a serious threat to the stability of the country, as they weren’t directly opposing the queen or her main policies such as religion or foreign policy. There was also no attempt to overthrow her during her reign showing the government was successful and the majority of the population did not disagree with her policies.

Disturbances such as these would only become a threat to the crown when members of the governing classes became involved and openly disagreed with the queens policies, which happened very rarely. For example, the Earl of Essex who turned against the Queen in 1600 and attempted a revolt which later failed. However, this was more due to the fact that Elizabeth had removed his monopoly on sweet wines, therefore for financial reasons, than due to him opposing to her ideas or policies. Elizabeth’s government was further shown to be successful as rebellions such as this were stopped quickly and the leaders, including Essex, were executed.

Another way of explaining the lack of direct opposition to the queen’s policies would be to look at the way local government was run. This system could have fairly easily become corrupt as JP’s were unpaid local people, you could therefore argue that they knew what was best for their area and they could quietly ignore the queen’s orders if they believed it would benefit their area and reduce the risk of local riots over policies such as religion. Therefore lack of rebellions could not necessarily indicate whether or not people agreed with polices if the policies were not being enforced by their local governing classes.  This ability to become corrupt could lead some people to say that local governments were inefficient and unsuccessful. However, even if this did occasionally happen there is no evidence that it was common throughout all of England.

Also, if this was commonly the case you would expect JP’s and other local governing classes who did not agree with the queens policies to go to parliament in order to debate their case to her, or her council. However there is no evidence of this, or any major conflict between queen and parliament. Where historians such as Neale once thought conflict in parliament did occur, this has later been disproved by revised historians.  For example, there was no evidence of major conflict within parliament, or riots in general, over religion; therefore we can deduct that the majority of the governing classes broadly agreed with Elizabeth’s religious policy. Overall, as we cannot prove that the governing classes were against Elizabeth’s policies, so we can then assume that they were mostly therefore in broad agreement with it.

In conclusion, I agree mostly but not fully that the majority of the governing classes were in broad agreement with most of Elizabeth’s policies and that her government was successful because of this. This is because Elizabeth’s system of government was reliant on mutual cooperation between the governing classes therefore at least broad agreement was needed for this to work. There were also no direct threats against the queen during her reign or plots to overthrow her. I cannot agree fully, however, as there were still some small scale disturbances and members of the governing classes such as Essex who revolted against the queen. There is also not clear, strong evidence that the majority of people were pleased with her policies – this is mostly based on the lack of objection within parliament and local government to Elizabeth’s policies.