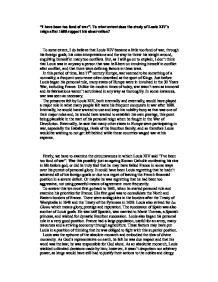 "I have been too fond of war". To what extent does the study of Louis XIV's reign after 1688 support his observation? To some extent, I do believe that Louis XIV became a little too fond of war, through his foreign goals, his miss-interpretations and the way he threw his weight around, engulfing himself in many too conflicts. But, as I will go on to explain, I don't think that Louis was in anyway a person that was hell-bent on involving himself in conflict after conflict, and that there were defining factors in these wars. In this period of time, late 17th century Europe, war seemed to be something of a normality; a frequent occurrence often described as the sport of Kings. Just before Louis began his personal rule, many states of Europe were in involved in the 30 Years War, including France. Unlike the modern times of today, war wasn't seen as immoral and its fabrications weren't scrutinised in any way as thoroughly. In some instances, war was seen as necessary. The pressures felt by Louis XIV, both internally and externally, would have played a major role in what many people felt were his frequent conquests in war after 1688. Internally, he would have wanted to use and keep his nobility busy as that was one of their major roles and, he would have wanted to establish his own prestige, this point being plausible in the start of his personal reign when he fought in the War of Devolution. Externally, he saw that many other states in Europe were participating in war, especially the Habsburgs, rivals of the Bourbon family, and so therefore Louis would be wishing to not get left behind while these countries waged war at his expense. ...read more.

The way the French Army of 30,000 men captured Phillipsburg and other cities in the Palatinate was hugely controversial and ruthless even in the times of 17th Century warfare. This was a hugely significant sufficient cause for the Nine Years War and shows that Louis did love war too much, especially as he approved the tactics used by the French troops. In addition, the incidents at K�ln and the Palatinate showed that Louis still wanted some power in the German states so there could be arguments that Louis didn't love war too much but was too narrow-minded to find a peaceful way to succeed in his foreign objectives. This wasn't a war that Louis XIV intended but it is clear that the war was provoked by Louis and initiated by his manifest ambitions in the Rhineland. The aggressive nature of his aims and the way he carried them out showed that Louis possibly was too fond of war, but it was his miss-interpretations which resulted in the war lasting as long as it did. His failures to realise the two large political changes in Europe was vital; these changes being the defeat of the Ottomans, and the arrival of William of Orange (now William III) in England. The war was also caused by many sufficient causes which added up to make it enough for war to occur, in which Louis was influenced by his earlier successes and became somewhat irrational and careless. After the Treaty of Ryswick in 1697, Louis XIV's immediate actions weren't that of someone that loved war too much. ...read more.

The death of one of Louis most important minister, Colbert, was a very significant reason for Louis increasing amount of irrational behaviour. From the years of 1661 to 1683, Louis had led France into a successful era, with undoubted success in his foreign policies. However, the death of Colbert in 1683 led to a change in the way things were done. Louis began to be rasher in his decisions. He banned Protestants in the Edict of Nantes in 1685, as well as invading the Palatinate. This evidence suggests that earlier in Louis reign, he may have been pushed in a different direction by Colbert and the rest of his advisers. Therefore some of the blame can be put on his Court after the death of Colbert, as they failed to inform Louis of the mistakes he made. Therefore, it may have been that Louis wasn't too fond of war, but that he made poor decisions without good advice from his Court. The fact that France had monumental debts by the end of Louis' reign does show that maybe he did love war too much. He had led a country that was rich in population, resources and the economy, to incredible debt and mass suffering. Louis' ultimate flaw was his utter inability to leave well alone as he ended up waging wars forgetting about France's poor position. He had though succeeded in many of his foreign goals and it may be that he was fighting war for justified reasons. There were however flaws in his foreign policies and the way he executed them, forgetting about the cost to his country and his people. From this, it is conceivable to say that Louis loved war too much. WORDS-2,748 ...read more.