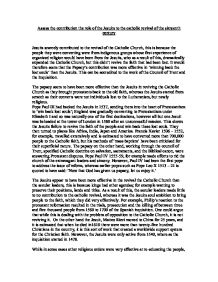 Assess the contribution the role of the Jesuits to the catholic revival of the sixteenth century Jesuits scarcely contributed to the revival of the Catholic Church, this is because the people they were converting were from indigenous groups whose first experience of organized religion would have been from the Jesuits, who as a result of this, dramatically expanded the Catholic Church, but this didn't revive the faith that had been lost. It would therefore seem that the Papacy's contribution was more effective in 'winning back the lost souls' than the Jesuits. This can be accredited to the work of the Council of Trent and the Inquisition. The papacy seem to have been more effective than the Jesuits in reviving the Catholic Church as they brought protestants back to the old faith, whereas the Jesuits started from scratch as their converts were not individuals lost to the Lutheranism, but newly religious. ...read more.

However, Paul IV had been the first pope to address the issue of reform, whereas earlier popes such as Pope Leo X 1513 - 21 is quoted to have said: 'Now that God has given us papacy, let us enjoy it.' The Jesuits appear to have been more effective in the revival the Catholic Church than the secular leaders, this is because kings had other agendas; for example wanting to preserve their positions, lands and titles. As a result of this, the secular leaders made little to no contribution to the catholic revival, whereas it was the Jesuits soul ambition to bring people to the faith, which they did very effectively. For example, Philip's reaction to the protestant reformation resulted in the trials, prosecution and the killing of between three and five thousand people from 1560 to 1700 of the Spanish inquisition. One could argue that while this is dealing with the problem of opposition to the Catholic Church, it is not reviving it. ...read more.

This gave the Jesuits the added influence and support at senior government level. On the other hand, while some of these new orders were very small and were never more of a symbol of what could have been, others were working effectively in large numbers and from much earlier on than the Jesuits, such as The Capuchins, who had 700 members by 1530 and 7000 by 1596. However, they were only working in Italy up until 1560, and didn't expand much beyond that afterwards. Overall, it would seem that the Jesuits were crucial to the advancement of Catholicism as a worldwide religion, but it could not be said that they had brought about a revival as such. Although they spread Catholicism across many different countries, the belief they left behind was one-dimensional. In contrast to this, the Papacy reformed itself from within, which is apparent from the change in the behavior of the Popes over the century, and their consistent backing of the council of Trent, the Spanish Inquisition and the different religious orders, the Jesuits included. ...read more.