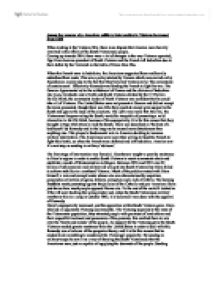 Assess the reasons why American military intervention in Vietnam increased from 1954 When looking at the Vietnam War, there is no dispute that America were heavily involved in the affairs of the South Vietnamese people. Coming up towards 1954, there were a lot of changes in the way Vietnam operated; Ngo Diem became president of South Vietnam and the French left Indochina due to their defeat by the Vietminh in the battle of Diem Bien Phu. When the French were in Indochina, the Americans supported them and heavily subsidised their costs. This was a policy started by Truman which was carried on by Eisenhower, mainly due to the fact that they believed Vietnam to be 'the cornerstone of containment'. Effectively Kennedy was funding the French to fight his war. The Geneva Agreements led to the withdrawal of France and the division of Indochina into Laos, Cambodia and a North and South Vietnam divided by the 17 Parallel. Ho Chi Minh, the communist leader of North Vietnam was confident that he could take all of Vietnam. ...read more.

South Vietnamese military overthrew him in a coup in October 1963, it is believed it was done with the approval of Kennedy. Diem's unpopularity increased, and the opposition within South Vietnam grew. Diem labelled all opponents Vietcong (communist). The Vietcong appealed to the mass of the Vietnamese population, they attracted people with promises of land reform and their respectful treatment and persuasion of the peasants, this enabled them to win over the 'hearts and minds' of the people. As support for the Vietcong grew the South Vietnam needed greater assistance from the United States in order to deal with this. Kennedy was a believer of the quagmire theory, and it is for this reason that he needed to do something to counteract the Vietcongs' popularity. By sending in military troops he saw it as a way of showing the South Vietnamese that the Americans were just as capable of supplying the demands of the people. Sending troops in showed that the Americans could offer protection to a corrupt Vietnamese nation. ...read more.

had to continue escalating as none of them wanted to accept the fall of Vietnam to communism during their term, but also did not want to fully commit troops which could be unpopular. Kennedy, being a great believer of the domino and quagmire theory, matched with his desire not to be blamed for the 'loss of Vietnam', saw military intervention as the only direction to move in. The fact that previous presidents had been blamed for Chinas' fall to communism drove Kennedy on to make pivotal decisions. American intervention was primarily determined by the context of the Cold War, the US could not sanction the loss of Vietnam to communism and the further the US got embroiled in sustaining the unsustainable in South Vietnam, the harder it became to pull out, the quagmire theory. Johnson's strong military intervention came as a result of years of support to a corrupt regime which failed to win the 'hearts and minds' of the Vietnamese people, when Ho Chi Minh and North Vietnam could offer unity and independence, the US presence could, realistically, offer only continued conflict. ...read more.