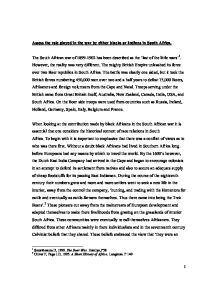 Assess the role played in the war by either blacks or Indians in South Africa.

Assess the role played in the war by either blacks or Indians in South Africa. The South African war of 1899-1902 has been described as the 'last of the little wars'1. However, the reality was very different. The mighty British Empire unleashed its force over two Boer republics in South Africa. The battle was clearly one sided, but it took the British forces numbering 450,000 men over two and a half years to defeat 75,000 Boers, Afrikaners and foreign volunteers from the Cape and Natal. Troops serving under the British came from Great Britain itself, Australia, New Zealand, Canada, India, USA, and South Africa. On the Boer side troops were used from countries such as Russia, Ireland, Holland, Germany, Spain, Italy, Belgium and France. When looking at the contribution made by black Africans in the South African war it is essential that one considers the historical context of race relations in South Africa. To begin with it is important to emphasize that there was a conflict of views as to who was there first. Without a doubt black Africans had lived in Southern Africa long before Europeans had any means by which to travel the world. By the 1600's however, the Dutch East India Company had arrived in the Cape and began to encourage colonists in an attempt to defend its settlement from natives and also to secure an adequate supply of cheap foodstuffs for its passing East Indiamen. ...read more.

The treatment of the black population was far more liberal in the Cape and Natal under the rule of the British then under the Boer governments in the Transvaal and the Orange Free State. The hope of many blacks was that if the Boers were defeated militarily, and the republics administered by the British, the condition of the blacks would rise and their prosperity increase. In 1899 both the Boers and the British were in broad agreement that blacks would not be armed on any scale or encouraged to fight in what was seen as a 'white mans war'. It was thought by many that the participation of blacks would 'turn a civilized war into a barbaric struggle.6 The British also at this point decided against the use of non white troops from the Empire in military operations in South Africa. Once the war was under way and both sides began to feel the strain on their military resources it became clear that Africans would need to play a large part in supporting the war effort of both sides. Although it is accurate to say that the majority of non whites supported the British, it is estimated that at the start, approximately 9,000 were with the Boers, this number lowering as the Boers fortunes dwindled. ...read more.

The death toll was high on both sides and lives were devastated all over Southern Africa and beyond. The death toll for the black African population is hard to calculate as many deaths went unrecorded. The latest estimates that of the 115,000 blacks interned in concentration camps, 20,000 died. There were also countless blacks who were shot by the Boers if they were suspected of helping the British, and those who were killed while performing their duties as scouts or agterryers. What is clear from the extensive evidence on the South African war is that non whites had a significant role to play in the implementation of the war effort for both sides. It could never have been a 'white mans war' in a country where 3/4 of the population were black or coloured. Nor were the effects of war confined to those black people who were enlisted in duties for the Afrikaners or the British, the war touched the lives of every black and coloured community throughout the country. For half a century after the Boer war blacks and coloureds were written out of all records by both the Afrikaners and the British. Their suffering as well as their bravery remained unacknowledged. Influential statesmen and military figures such as Smuts, De Vet and Reits were guilty of denying or playing down the role of the black and coloured communities in the war. ...read more.