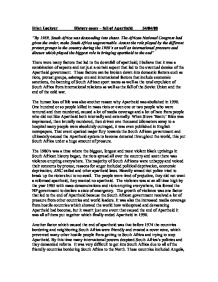 Brian Lockyer History essay - fall of Apartheid 34/04/08 "By 1989, South Africa was descending into chaos. The African National Congress had given the order, make South Africa ungovernable. Assess the role played by the different protest groups in the country during the 1980's as well as international pressure and discuss which played the biggest role in bringing apartheid to the end" There were many factors that led to the downfall of apartheid; I believe that it was a combination of aspects and not just a certain aspect that led to the eventual demise of the Apartheid government. These factors can be broken down into domestic factors such as riots, protest groups, sabotage etc and international factors that include economic sanctions, the banning of South African sport teams as well as the total expulsion of South Africa from international relations as well as the fall of the Soviet Union and the end of the cold war. ...read more.

The majority of South Africans were unhappy and voiced their concerns by protest, reasons for anger included political deprivation, economic deprivation, ANC exiled and other apartheid laws. Heavily armed riot police tried to break up the rioters but to no avail. The people were tired of prejudice, they did not want a reformed apartheid, they wanted no apartheid. The violence was at an all time high by the year 1985 with mass demonstrations and riots erupting everywhere, this forced the NP government to declare a state of emergency. The growth of violence was one factor that led to the end of Apartheid because the South African government received a lot of pressure from other countries and world leaders. It was also the increased media coverage from hostile countries which showed the world how widespread and devastating Apartheid had become, but it wasn't just one event that caused the end of Apartheid it was all of them put together which finally ended Apartheid in 1990. ...read more.

The US wanted South Africa on her side and wanted to keep her happy as South Africa was viewed as a pillar of capitalistic strength in Africa. The US also wanted control of the trade and shipping routes that go past South Africa and did not want them to fall in the hands of the soviets. It was only once communism had ended that the US put pressure on South African to end apartheid. All of these consequences of Apartheid finally came about to bring it to an end with a man called De Klerk, who was an instrumental figure in bringing about the end of the Apartheid regime. De Klerk replaced P.W Botha in 1989, De Klerk was a man who went against his family's history and legacy and ultimately saved South Africa from a b****y civil war. He was the man who started the negotiations for the release of Nelson Mandela and the unbanning of the ANC and PAC all which ended the brutal regime of Apartheid and saved South Africa from more years of bloodshed and suffering. ...read more.