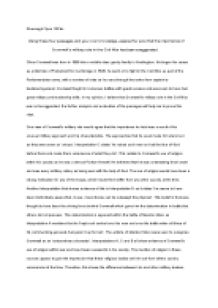 Assess the view that the importance of Cromwells military role in the Civil War has been exaggerated.

﻿Shaunagh Flynn 13Pbn Using these four passages and your own knowledge, assess the view that the importance of Cromwell?s military role in the Civil War has been exaggerated. Oliver Cromwell was born in 1599 into a middle class gentry family in Huntingdon. He began his career as a Member of Parliament for Cambridge in 1628; he went on to fight in the Civil War as part of the Parliamentarian army, with a number of roles as he rose through the ranks from captain to lieutenant-general. Cromwell fought in numerous battles with great success and was seen to have had great military and leadership skills. In my opinion, I believe that Cromwell?s military role in the Civil War was not exaggerated; the further analysis and evaluation of the passages will help me to prove this view. One view of Cromwell?s military role would agree that the importance he held was a result of his unusual military approach and his characteristics. The approaches that he used made him stand out as they were seen as ?unique?. Interpretation C states ?he raised such men as had the fear of God before them and made them conscience of what they did?. ...read more.

However, we need to consider whether this success as a cavalry commander was equally matched by his career as a general. Interpretation C also shows evidence of further military victories such as the defeat of Rupert at the battle of Naseby in June 1645 and a following success at the battle of Langport, which gave the Parliamentarians control over the West of England. This proves evidence that he was equally successful as a general and therefore deserves his reputation. Further evidence of military success is also apparent within Interpretation D, regarding ?the Preston campaign of 1648?, this was a battle in which Cromwell was the main commander of the force and defeated the attacking Royalists and Scottish armies. This victory was seen to be the defeat of the Royalists that lead to the end of the Civil War. These numerous military successes are evidence that Cromwell showed importance to the military cause of the Parliamentarians. We also know of another military success that took place in 1649, this was Cromwell?s conquest of Ireland where he took Wexford in a massacre of 3,500 troops and civilians with only a small number of Parliamentarian casualties in comparison. ...read more.

This could be because he did not reach the peak of a military career as he changed his focused himself on the political issues within England at the time. This fact could indicate that his military career was exaggerated as the evidence focuses on his success as a cavalry commander rather than a general in a higher ranked position. However, a clear judgement regarding this cannot be made, as further evidence regarding his victories as a general would need to be assessed. In conclusion, it is possible that the importance of Cromwell?s military role was slightly exaggerated but he was important to the Parliamentarian side through the numerous victorious battles that he was a part of, which are shown in interpretation A, C and D. His unusual military approach such as the use of discipline and religion, as well as his own personality set him apart from others cavalry commanders. All these characteristics made Cromwell a success and as source B states, went on to help him in his political career, it could be said that this political career was a result of his actions in a military role. Ultimately, Cromwell?s importance in a military role was not exaggerated and he proved to be a very successful asset within the Civil War due to his numerous military victories. WORDS: 2004 ...read more.