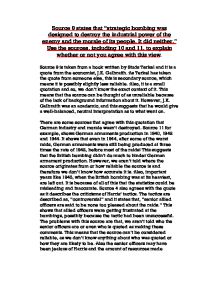 Source 9 states that “strategic bombing was designed todestroy the industrial power of the enemy and the morale of its people. It did neither.” Use the sources, including 10 and 11, to explain whether or not you agree with this view.

Source 9 is taken from a book written by Studs Terkel and it is a quote from the economist, J.K. Galbraith. As Terkel has taken the quote from someone else, this is secondary source, which means it is possibly slightly less reliable. Also, it is a small quotation and so, we don’t know the exact context of it. This means that the source can be thought of as unreliable because of the lack of background information about it. However, J.K. Galbraith was an academic, and this suggests that he would give a well-balanced, neutral interpretation as to what went on.

There are some sources that agree with this quotation that German industry and morale wasn’t destroyed. Source 11 for example, shows German armaments production in 1940, 1942 and 1944. It shows that even in 1944, after some of the worst raids, German armaments were still being produced at three times the rate of 1942, before most of the raids! This suggests that the British bombing didn’t do much to hinder German armament production. However, we aren’t told where the source originates from or how reliable the source is and therefore we don’t know how accurate it is. Also, important years like 1945, when the British bombing was at its heaviest, are left out. It is because of all of this that the statistics could be misleading and inaccurate. Source 4 also agrees with the quote as it describes the criticisms of Harris’ tactics. The tactics are described as, “controversial” and it states that, “senior allied officers are said to be none too pleased about the raids.” This shows that allied officers were getting frustrated at the bombings, possibly because the tactic had been unsuccessful. The problems with this source are that, we aren’t told who the senior officers are or even who is quoted as making these comments. This means that the source can’t be considered reliable, as we don’t know anything about who was quoted or how they are likely to be. Also the senior officers may have been jealous of Harris and the amount of resources made available to him and this would have made their views biased against Harris.

There are also some sources that contradict the quotation in Source 9. For example, Source 5 was written by a British reporter and was published in the evening standard on the 14th of February in 1945. It tells us that that over 1250 liberators and fortresses of the Us eight air force-attacked Dresden after a night of heavy R.A.F bombing. It says that Dresden was bombed as it was being used as a platform to launch attacks on marshal Koniev’s left flank, it has a large munitions factory and it had teplephone, communications services its roads and railways were essential to the German army and it had lots of soldiers evacuated from other towns and cities. Dresden was bombed very hard, in-fact the fires could be seen 200 miles away, this would lead you to believe that the communication and transports systems would defiantly have been damaged if not destroyed. This source doesn’t give me a lot of information about the extent of the bombing so this suggests it has been severely censored.  10, a quote from a brigadier during the war, describes, “severe damage” and it also comments on the German war economy, saying it was, “on the point of complete collapse.” The fact that the word, “Destroyed” isn’t used and that it was “on the point” of collapse is key as the economy was only damaged, not destroyed as such. The brigadier’s view may have also been slightly biased as he was fighting in the war and he might want to exaggerate the events a little so they seem more heroic. Sources 7 and 8 also disagree with Source 9 as they both talk about the destruction of German cities and morale. Although we don’t know very much about the author of source 7, it can be thought of as reliable because diary entries are private and usually not biased. The author says, “it is hard to imagine the panic and chaos,” this tells us that the Germans were in a real state of panic and that everything wasn’t how the Government had described it. Also in Source 8, a diary entry from Josef Goebbels, he expresses his concern about the civilian morale and also he says, “with most serious consequences both for the civilian population and for armaments production,” this shows that the bombing did do a considerable amount of damage, so much so, there was unrest among the Nazi leadership. If there was unrest in the leadership that’s means the German people must have been uneasy and losing faith in the nazi party.

In conclusion, the bombing of German cities, although very costly on both sides, did alter the outcome of the war somewhat because of the evident damage done. I also feel that although German armaments production wasn’t “destroyed” as such, it was considerably reduced. Sir Arthur Harris is quoted as saying, “Terror bombing will destroy the enemy’s will to fight,” I feel that, even though this wasn’t achieved, it did damage the morale to a certain extent. However, ultimately there is not enough information available to make a completely accurate assessment of the effects of the bombing.