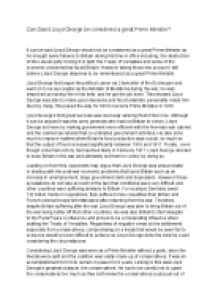 Can David Lloyd George be considered a great Prime Minister?

Leading on from this, opponents may argue that Lloyd George was unsuccessful in dealing with the post-war economic problems that faced Britain such as an increase in unemployment, large government debt and depression. However these accusations do not take account of the fact that conditions were very difficult and other countries were suffering similarly to Britain. For example Germany owed 132 billion marks in reparations, Italy suffered more casualties than Britain and French colonial troops felt mistreated after returning from the war. Therefore, despite Britain suffering after the war Lloyd George was able to bring Britain out of the war being better off than other countries. ...read more.

This means many of the decisions made by Lloyd George may have been influenced by the conservatives, he became their 'scapegoat'. So any actions or decisions made by the conservatives that proved to be disastrous would be seen by the British public as Lloyd Georges fault. Furthermore he would not have been able to make any changes that could've benefitted Britain if they were deemed bad by the conservatives. To conclude, Lloyd George did sometimes have poor judgement and may not have always made the best decisions but he was undeniably a great politician. He was faced with hard times and can best be described as doing the best he could with what he had despite of the hard times. ...read more.