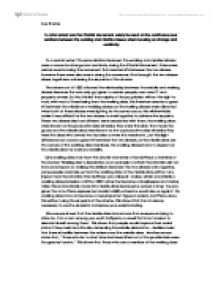 One working class man from the Chartist movement, Francis Place a member of the London Working Men’s Association, is an example to which the Chartists did not have any impact on making the divisions between the two classes unite together, some people could rise up from the working class to the middle class without any impact from the Chartists. Francis Place was a Breech-maker, which was initially a working class profession until the 1820’s when he became a shopkeeper and master tailor; this automatically made him middle class because he owned a shop he was given the vote. Place represented social mobility where he would rise up against his working class status to become a more important figure in society and Place done this without using the six points of the charter. This shows that it is not always necessary to use the six points to improve your social standing.

The Birmingham Political Union led by banker Thomas Attwood, claimed that they were a united political union and held a common interest against aristocracy. The movement felt that the Reform Act of 1832 had gone nowhere near far enough and that there was still a crucial distinction between the ‘productive’ and ‘unproductive’. The BPU were perhaps one of the strongest radical force for moderation and ‘moral force’ during the 1830’s, however their collapse under the strains placed on it during the Chartist National Convention of 1839. The power balance, at least in terms of language and rhetoric shifted from moral force to physical force, this is some ways either alarmed or demoralised the moral force men.

The Anti-Corn Law League was introduced when Britain was a war with France, the French Navy tried to stop imports getting to Britain, the main impact was on corn. The price of corn in Britain rose at the time as a result of this the price of bread rose as corn was in short supply as a result of this farmers made huge profits as a result of the corn shortages due to war. When the Napoleonic wars finished corn started to be imported into Britain again so thus British farmers were annoyed because their corn was not worth as much due to the increase in imports from abroad. To protect British farmer’s imported corn was taxed so it was more expensive than British corn and thus British farmers still made a profit and a living. This affected the corn and bread prices in Britain as a whole, the price of corn and bread was artificially high. The middle classes were against the corn law as it is not free trade and the working classes would be against the corn law because it made bread prices more expensive. One source says that the Anti-Corn law was just another reform/organisation put in place to oppress the working classes, ‘they want to get the Corn Laws repealed – not for your benefit – but their own.’’  Another source says ‘’ they said when they had gotten their votes, they would help you get yours. But they and the rotten Whigs have never remembered you.’’ This shows that the middle class and the government do not care about the working classes as long as they are happy with what they have they do not care with what the working classes are missing out on. The Anti-Corn Law League did not create any change between the working and middle classes; there was still a huge rift between the two.

The Complete Suffrage Movement of 1842 was a deliberate attempt to bridge the widening gulf between the middle and working classes around support for universal manhood suffrage. It was led by Joseph Sturge a Birmingham Quaker Philanthropist, Struge disliked violence and sought reconciliation this is mainly because he was a Quaker which is a religious leader. He seemed to have been liked by all the Chartist leaders with whom he came into contact with, he even achieved to unite Fergus O’Connor and William Lovett in their opinion of him. The Complete Suffrage Movement did bring about some sort of change to the Chartist Movement, as it was an attempt to unite the working and middle classes behind the six points and suffrage. However it was continuity because the working and middle classes were still not getting along and the skilled workers were still suffering due to the industrial change.

The working and middle classes during the 1840’s of the movement both showed different sides on the Chartist Movements itself; for example at the conference of 1842 the middle class delegates showed no support for the Charter and would not want to be associated with it by name. However there was a scene of unity between the two of the main influential leaders of the Movement; Lovett and O’Connor, at the December conference O’Connor showed a rare sense of unity and seconded a motion proposed by Lovett, they agreed on the motion that ‘six points were centred for the working class.