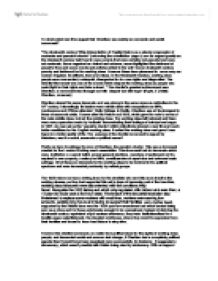 Why, and with what success did Alexander II embark on a series of reforms?

To what extent can it be argued that Chartism was mainly an economic and social movement? "The nineteenth-century Whig interpretation of English history as a steady progression of moderate and peaceful reforms" (reforming the constitution page x) can be argued greatly as the nineteenth century held host to many events that were certainly not peaceful and were not moderate. Some regarded as violent and extreme, some highlighted the detriment of people's lives and some events and policies added to the well known nineteenth century poverty and detriment for the working class. However these have pioneered in some way our modern England, its attitude, laws and values. In the Nineteenth Century, working class people were overworked, underpaid, disregarded for human rights and disgruntled. The Chartist Movement was one of the events which shaped the working class as people who could fight for their rights and take a stand. "The chartist's greatest achievement was Chartism, a movement shot through not with despair but with hope" (Royle, E (1998) Chartism, consman) Chartism shared the same demands and was strong in the same areas as radicalism in the 18th century. ...read more.

long hours and having to support their families and a further insult, supported by the middle class was the 1834 poor law amendment act which treated being poor as a crime and for those unfortunate enough to be unemployed, instead of claiming the nineteenth century equivalent of job-seekers allowance, they were institutionalised in a bastille-esque establishment, the dreaded workhouse, where they would be separated from their families and forced to incur hard labour to stay alive. However the chartist movement, no matter how political stood for the rights of working class people, and demanded social and economical change, If Chartism had a completely political agenda then it would have been organised more successfully, for instance; it suggested a democracy, which wasn't possible with Britain being ruled by aristocracy. With no support from anyone with the vote, the chartists were on their own and demanded huge parliamentary reform, in form of three failed petitions; which suggested desperation for change rather than political hunger, moreover the reaction to the petitions failing show a disorganised force; the two main chartist leaders differing in opinion, Lovett used 'moral force' and continued to push for the charter's acceptance, on the other hand O'Connor advocated physical force and the demonstrations in Sheffield and Newport are examples of this. ...read more.

This suggests they did predominantly have a political agenda and could've just used the economic situation to their advantage, the working class and poor were relied on for support and unsurprisingly fed that support in thousands. As an 'outside' party, they relied on the bad economic and social times to gain that support. Interestingly they were most popular at these times and when the situation got better in England, they were known to have failed. Although Chartism did decline in 1848, five of the six demands of the Charter are now in action, Annual Parliaments understandably not as this would require far too much administration, and a party would have less than a year to practice its principles. In conclusion, I perceive the chartist movement as a radical group who saw the only way to achieve a comfortable life for the working class and poverty stricken Britons would be to gain political power. "The importance of food was also proved at a Sheffield meeting when asked 'what do we want' someone replied 'somat t'eat' [something to eat]. In essence the working man joined Chartism because he was unemployed, hungry and frightened" (www.historyhome.co.uk/peel/chartism/charmod.htm 2011) ...read more.