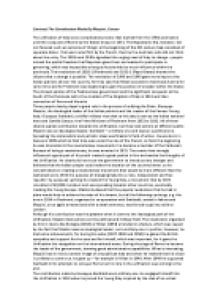 Contrast The Contribution Made By Mazzini, Cavour and Garibaldi to Italian Unification

﻿Contrast The Contribution Made By Mazzini, Cavour The unification of Italy was a complicated process that started from the 1790s and lasted until the conquest of Rome by the Italian troops in 1871. The Napoleonic Era, however, did not forecast such an outcome of things: at the beginning of the XIX century Italy consisted of separate states that were ruled first by the French, then by the Austrians who did not think about the unity. The 1820s and 1830s signalized the urging need of Italy to change ? people missed the partial freedom that Napoleon gave them and wanted to participate in governing, which was impossible as long as Austria held so much influence within the peninsula. The revolutions of 1820-1 (Piedmont) and 1831-2 (Papal States) showed the citizens that a change is possible. The revolution of 1848 and 1849 gave more hope to the Italian patriots all over the country, for they saw that Milan was able to hold back Austria for some time and for Piedmont was beginning to gain the position of a leader within the States. The shrewd policies of the Piedmontese government and the significant conquests at the South of the Peninsula led to the creation of The Kingdom of Italy in 1861 and then connection of Rome and Venetia. ...read more.

After 1849 he supported Garibaldi in his attempts to conquer Rome but his role in the unification was coming to the end. The contribution made by Giuseppe Garibaldi was a military one. He engaged himself into the Unification in 1833 when he joined the Young Italy inspired by the idea of an united Italian state. As Mazzini, after the failure in Piedmont in 1834 he escaped to South America. What s important, the time spent by Garibaldi in America was not a wasted period: he learned how to fight at the land, because before, due to his marine origins, he was used to fight on a ship. Like Mazzini, he also gained an important political feature that was recognition in America. When he heard of the planned revolutions during the Spring of Nations, he came back to his motherland with a guerilla called the Red Shirts and helped Mazzini with defending Rome. The actions of Garibaldi were not successful, due to the fact that he was not fully educated in terms of militia and war and once again he fled to America to come back in 1854 and take part in an Austro-Piedmontese war. ...read more.

He even had a conflict with Mazzini: they both disliked each other and did not try to understand the other?s position. He stood in opposition to the figures of nationalists and their ideas. When it came to military actions, Cavour was not taking part with them, he only planned them and as a Prime Minister did accept some military decisions or did not ? for example the decision of taking part in the Crimean War. As a long and complicated process, the Unification of Italy needed the devotion of many people, but it was also in need of leaders that would make the right decision at the right time and be aware of the consequences. Although the contribution made by Garibaldi, Mazzini and Cavour were not equal, together they built an important base for the future of a united Italy. They actions were often ambiguous, but each one of them was the most important person in one field: Mazzini ideologically, spreading the spirit of nationalism all over the country and making attempts to unite the state; Garibaldi militarily, defending Rome, conquering the South and showing the people that victory is not possible; Cavour politically, rationally planning every step of Piedmont and giving up his aims for the greater good. ...read more.

This is a knowledgeable response which devotes equal weighting to each of the three figures and uses comparison to explore their strengths. There is a strong amount of detail throughout, although sometimes the author's points are weakened by poor grammar; proof-reading is essential. 4 out of 5 stars.