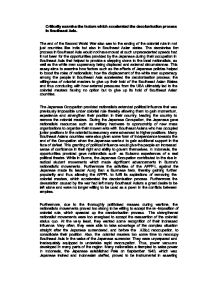 Critically examine the factors which accelerated the decolonisation process in Southeast Asia.

Critically examine the factors which accelerated the decolonisation process in Southeast Asia.

The end of the Second World War also saw to the ending of the colonial rule in not just countries like India but also in Southeast Asian states. The decolonisation process in Southeast Asia would not have moved at such unprecedented speeds had it not been for the opportunities provided by the Japanese during their occupation in Southeast Asia that helped to provide a stepping stone to the local nationalists, as well as the white men supremacy being displaced and external circumstances. This essay aims to examine how factors such as the effects of Japanese policies helped to boost the roles of nationalists; how the displacement of the white men supremacy among the people in Southeast Asia accelerated the decolonisation process; the willingness of colonial masters to give up their hold of the Southeast Asian States and thus concluding with how external pressures from the USA ultimately led to the colonial masters having no option but to give up its hold of Southeast Asian countries.

The Japanese Occupation provided nationalists extended political influence that was previously impossible under colonial rule thereby allowing them to gain momentum, experience and strengthen their position in their country, leading the country to remove the colonial masters. During the Japanese Occupation, the Japanese gave nationalists resources such as military hardware to sponsorship of new mass organizations to organize their movements with. Southeast Asians who has occupied junior positions in the colonial bureaucracy were advanced to higher positions. Many Southeast Asians countries were also given some form of independence towards the end of the Occupation when the Japanese wanted to gain additional support in the face of defeat. This granting of political influence would give the people an increased sense of confidence in their right and ability to govern themselves. In Indonesia, the opportunities provided gave nationalists such as Sukarno experiences of a real political theatre. While in Burma, the Japanese Occupation contributed to the rise in radical student movements which made significant advancements in Burma's nationalistic movements. Furthermore the activities of the AFPFL against the Japanese made its leader Aung San a Burmese hero, thereby gaining further popularity and thus allowing the AFPFL to fulfil its aspirations of removing the colonial masters, which accelerated the decolonisation process. Furthermore the devastation caused by the war had left many Southeast Asians a great desire to be left alone and were no longer willing to be used as a pawn in the conflicts between empires.

Furthermore, due to the thoroughly politicised masses during wartime, the nationalists movements proved too strong to be willing to accept the re-imposition of colonial rule, which speeded up the decolonisation process. The strengthened nationalist movements were too energised to accept the reassertion of the colonial status quo. At the very least, they wanted some recognition of their increased influence. Very often, they were able to take advantage of the complex situation straight after the Japanese surrendered, and before the Allied reoccupation, to consolidate their position. Also, the colonial masters too some time to reoccupy Southeast Asia in the wake of the Japanese surrender. They were unprepared and inadequately equipped to undertake rapid reoccupation. Thus, power vacuums developed in many parts of the region. Many nationalists attempted to seize power. In Indonesia, the Japanese established Peta on September 1943, which was Japanese trained and Indonesian staffed, proved to be instrumental in asserting Indonesia's wish for independence in a militant way. The Japanese unwillingly allowed Sukarno and others to speak to various Peta units, inflaming them not only against the Dutch alone, but against imperialism in general. This receptive body of discontentment was ready to act on, identify themselves as a nation and quickly filled the vacuum left by the Japanese surrender. The people were armed with the confidence that they would never be compelled to submit to foreign rule, as well as the means to prevent it from happening.

The displacement in the belief of the white man's supremacy during the Japanese Occupation allowed the locals to gain confidence and believe that they could remove the colonial powers and rule themselves, and thereby largely accelerating the decolonisation process. The position of the colonial masters in the eyes of the Southeast Asians would be undermined permanently as a result of the swift and decisive Japanese victory. The Japanese swift advancement into SEA took everyone by surprise and its success went far in diminishing Western claims to superiority. The Western imprints left on SEA were undermined by Japanese attempts to impose its own imprints on SEA. The Japanese would carry out an aggressive propaganda campaign to build up anti-Western feelings. The propaganda of liberation such as the Greater East Asia Co-Prosperity Sphere whereby the Japanese proclaimed that their mission was the eradication Western influence and bring freedom and prosperity to all races living in the sphere is one such example. The Japanese would promote national symbols like local languages, the flag and anthem thus helping to entrench the idea of the nation in the process. The Japanese occupation thus weakened colonial authority; for those who have respected the colonial masters before, this respect would be undermined, for those who feared them, this fear would be reduced.

However, there are also instances where colonial powers voluntarily gave up power to lessen their burdens after the immense devastation derived from the Second World War, leading to the accelerated establishment of independent Southeast Asian states. The colonial masters' physical and psychological strength was greatly depleted. Their  own economies and armies had been exhausted as a result of the campaigns required to recapture the territories. Their pride had been dealt a big blow by the humiliating defeats at the hands of the Japanese. Although it was clear that the colonial masters intended to re-impose colonial authority, their efforts were in vain as the Southeast Asians would never be submissive in the face of colonial rule again. Ultimately, the colonial masters had to relinquish their hold on these states as it was proving to be too much to handle, in addition to its damages suffered during the war. In Malaya, the Britain was only willing to hand over power to the anti-communist Alliance Party (UMNO-MCA-MIC). The Alliance Party's landslide victory in the 1955 election also meant that the communal problems in malaya could be solved effectively. With the introduction of the Emergency in 1948 and the gradual subjugation of the communist forced of Malaya, the British granted independence in 1957. Hence, independence was achieved without having to really fight for it.

Some Southeast Asian states accelerated the decolonisation process through external diplomatic initiatives that would eventually prove to the colonial masters to be able to manage the country on their own. The international climate in the post war world seemed to be very conducive for the advancement of the nationalist cause. In Cambodia, the French continued to hold on to power even though it allowed political parties to form. Sihanouk, beginning in February 1953, toured France , the US and other countries demanding independence. In October 1953, the French gave in to Sihanouk’s campaign thus returning to an independent Cambodia a hero. And therefore accelerating the decolonisation process.  In Burma after the Second World War, the AFPFL and its leader Aung San has gained immense popularity and thus has ensured that the British upon returning would have to negotiate with them. Seeing how the British has not made any mention of a definite timeframe for independence even though self-government was promised, Aung San led and AFPFL delegation to London in January 1947. While there e negotiated the election of the constituent assembly to prepare a constitution for an independent Burma.

The external circumstances such as the American Crusade for a free world indeed helped significantly to speed up the decolonisation process, expecially in the Dutch East Indies. The Americans seemed to be promoting their cause with their encouragement for the start of decolonization. The promulgation of the Atlantic Charter of August 1941 which recognised “the right of all peoples to choose the form of government under which they will live” was the most prominent example of such encouragement. The strength of the Americans vis-a-vis the Europeans after the war seem to bode well for the Southeast Asians struggle for independence. American President Truman's assessment of Cold War priorities in 1949 was that the Dutch was better off employed against the communist threat in Europe rather than in Southeast Asia. Convinced that the overseas venture was draining Holland's lifeblood and impairing its domestic recovery as well as its contribution to the stability of Europe, the US not only refused to assist the Dutch in Southeast Asia but went as far as to threaten to withhold Marshall Aid from programmes for the rehabilitation of the Netherlands. American's discouragement of Holland's effort to recolonise Indonesia was a gift to the Indonesians as independence was “given” in 1949 by the Dutch unwillingly.

Hence, it can be concluded that effects of the Second World War, especially the Japanese Occupation, which accelerated the decolonisation process, and made it inevitable. The occupation triggered off the process and the returning colonial masters could at best interrupt, but not stop it. The development of mass nationalist movements, the weaknesses of the colonial masters after the war, international circumstances and the developments of the post war world were all important factors which resulted in the decolonisation process.