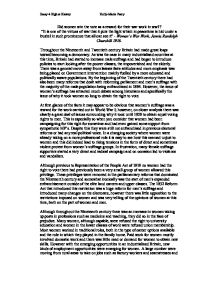 Did women win the vote as a reward for their work in WWI?

Did women win the vote as a reward for their war work in ww1? "It is one of the virtues of war that it puts the light which in peacetime is hid under a bushel in such prominence that all can see it" - Women's War Work, Jennie Randolph Churchill 1916. Throughout the Nineteenth and Twentieth century Britain had made great leaps toward becoming a democracy. As was the case in many industrialised countries at this time, Britain had started to increase male suffrage and had began to introduce policies to start looking after the poorer classes, the impoverished and the elderly. There was a general move away from laissez faire attitudes and more emphasis was being placed on Government intervention mainly fuelled by a more educated and politically aware populations. By the beginning of the Twentieth century there had also been many reforms that dealt with reforming parliament and men's suffrage with the majority of the male population being enfranchised in 1884. However, the issue of woman's suffrage has attracted much debate among historians and specifically the issue of why it took women so long to obtain the right to vote. At first glance of the facts it may appear to be obvious that women's suffrage was a reward for the work carried out in World War I; however, on closer analysis there was clearly a great deal of issues surrounding why it took until 1928 to obtain equal voting rights to men. ...read more.

or can know, the nature of the two sexes, as long as they have only been seen in their present relation to one another. Until conditions of equality exist, no one can possibly assess the natural differences between women and men, distorted as they have been. What is natural to the two sexes can only be found out by allowing both to develop and use their faculties freely." While Mill may not have been successful in his petitions to parliament it certainly raised the profile of the campaign. Many more petitions followed in time with no success and it is easy to see why the women's suffrage movement became disillusioned and frustrated with the progress. One of the first organised suffragist groups formed in 1897 was 'The National Union of Women's Suffrage', led by Millicent Fawcett their view was a liberal approach and followed on from previous attempts at gaining MP's support, which they believed was the only way to get their political voice heard. In some respects they did make some limited progress and were able to take on small Governmental roles such as Guardian of Poor Laws. The suffragists were keen to build on their experience of their limited governmental roles and progress, however progress was painstakingly slow. Out of the growing frustration at the lack of any radical changes a new organisation going by the name of 'The Woman's Social and Political Union' and more commonly known as 'The Suffragettes' was formed in 1903. ...read more.

Although the 1918 act went through both the House of Commons and House of Lords with surprising ease, its history was not an easy one. Female suffrage was a slow gradual process and took a long time to gain momentum and support. The radical campaign may have raised the profile but it clearly had a detrimental effect on the cause and only encouraged opposition from both men and women. However there is no doubt MP's such as Mills and the middle class suffragists made a more positive impact on the campaign and it could be argued that if the issue of female suffrage had been taken serious in political terms, the more radical sides would not have formed. Even without women's suffrage there had been a gradual progression in women's career opportunities and education and it could be argued that this progression would have continued. On the other hand radical groups argued that the liberal approach was not enough. It could also be argued that to create universal male suffrage to the returning soldiers of the war was and the abolition of property requirements was the real reason women obtained the vote when they did and therefore the main reason why they had not did so previously. Although most historians would agree that these factors indeed played a part it was a combination of not only political factors but also social views of women's roles in society and the negative suffragette campaign that took women so long to obtain the vote. ?? ?? ?? ?? Essay 4 Higher History Kelly-Marie Parry ...read more.