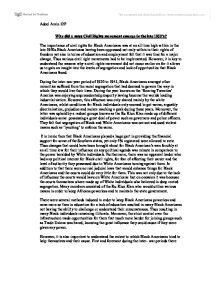 Why did a mass Civil Rights movement emerge in the late 1950's? The importance of civil rights for Black Americans was at an all time high within in the late 1950s.Black Americans having been oppressed not only within in their rights of freedom yet also in terms of education and employment felt that it was time for a major change. Thus various civil right movements had to be implemented. However, it is key to understand the reasons why a civil rights movement did not occur earlier on for it allows us to gain an insight into the levels of segregation and lack of opportunities that Black Americans faced. During the inter-war year period of 1920 to 1941, Black Americans amongst other minorities suffered from the racial segregation that had deemed to govern the way in which they would live their lives. During the year known as the 'Roaring Twenties' America was enjoying unprecedented prosperity having become the worlds leading industrial nation. However, this affluence was only shared mainly by the white Americans, whilst conditions for Black individuals only seemed to get worse; arguably discrimination, prejudice and r****m reaching a peak during these years. ...read more.

Thus there was no real momentum to actually try to implement any changes but it was more of an acceptance of circumstances that brought pessimism on any chance of change. Furthermore, the Black community suffered from a lack of opportunity due to poverty and unemployment. Even though during the 20's America was going through an affluent period it was not shared by the Black community due to the r****t views and the segregation the White community seemed to adhere to. In spite of the claim of President Herbert Hoover in 1928 'The poor are vanishing among us', poverty levels were at an all time high for the minorities. The fact that president Hoover did not acknowledge this allows us to realize that he was either ignorant of the situation or rather that he wanted to present USA as being 'liberated' and 'permissive'. The poverty increased massively during the 'Great Depression' in which many people were kept poor and more so those mentioned in the latter. Even though the Federal Government was given much greater influence over the states they actually did very little for African Americans. ...read more.

Another prime incident that conveys a willingness to bring about change is the involvement of President Kenney in the Little Rock incident, where Black Americans previously, due to the Brown v Topeka Education Board of Kansas Case had won the right to mixed raced schools. Furthermore the fact that Kennedy was 'forced' to become involved in the Little Rock incident reiterates the idea that the Federal Government had to work alongside Black Americans in order to create a fair and just society. Thus in the late 1950s a rapid wave of Civil Rights movements began to occur and with the aid of great motivational leaders such as Martin Luther King things steadily began to change. To conclude, it is apparent that in order for any actual civil rights movements to occur the use of motivation and having a leader is required. Moreover, it becomes understandable as to the reason of why civil rights movement actually took so long to be implemented. Thus it can be said that it not only requires a lot of dedication but self will in order to be able to handle such conditions and being oppressed to such levels. ?? ?? ?? ?? Adeel Amin 12P ...read more.

The question requires the student to provide several reasons why a civil rights movement emerged, and in the third sentence of the introduction the student points out the need to do this, which is good as it shows they understand ...

The question requires the student to provide several reasons why a civil rights movement emerged, and in the third sentence of the introduction the student points out the need to do this, which is good as it shows they understand the need to think widely enough to know there is more than one interpretation of all historical events. However, the student spends the second, third and fourth paragraphs talking about why the civil rights movement wasn't as strong as it could have been, which is bad because it suggests they don't have enough knowledge to answer the actual question. The student could improve by having a short paragraph just before the conclusion that starts with "However, it could be argued that the civil rights movement didn't emerge as strongly as first thought..." because this would show they were thinking outside the box about history, but also know enough to answer the question set rather than the one they'd like to answer. After the fourth paragraph, the student confidently discusses the various reasons why, such as poverty and World War Two. If they had put these first, the examiner would have instantly seen that they are thinking widely and not just focusing on one possible reason.

The essay would benefit from more precise forms of evidence. Instead of saying "in the late 1950Ã¢â‚¬â„¢s", the student could have learnt and used the exact significant event and year: often, students say things happened in general periods because they are unsure of the date, but knowing the year will prove that you have a strong grasp of your knowledge rather than a general understanding of the period. Also, the student could improve by quoting statistics: for instance, "due to poverty and unemployment" would become much better if the student said "due to poverty and unemployment, which rose among black people to _____ million by 19__" because it would show that the student understands that the rise in unemployment was large and significant. Not quoting a statistic means it might be a tiny number that wasn't really a cause of the movement. However, the conclusion is good: some students do a short conclusion because they run out of time or think they have said everything in the essay, but this student avoids falling into that trap because they reach a judgement - need for a leader - and even explains why it can take a long time for the movement to happen, which shows they have enough knowledge of history to understand why some historical events take longer than others. To make it even better, they could add in a few words summarising the alternative point of view, such as "Although it was clear that..." before launching into their judgement, as this would provide the continuing consideration of other views that examiners look for.

A real strong point of this essay's quality of writing is the use of words like "however", because these are constantly reminding the examiner that the student is aware of alternative interpretations (see Response to question section). Similarly, using words like "furthermore" shows that the student knows that an argument is stronger when there is more than one piece of evidence for it. However, the student could improve their quality of writing by structuring their essay more carefully: they could do a paragraph for each new argument and begin it with statements such as "Another interpretation of the movement was...". This would reinforce the student's understanding of alternative interpretations and leave the examiner in no doubt that the student is appreciating the need to include them.