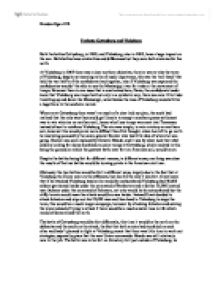 Evaluate Gettysburg and Vicksburg Both the battles Gettysburg, in 1863, and Vicksburg, also in 1863, have a huge impact on the war. Both battles have similarities and differences but they were both victories for the north. At Vicksburg in 1863 there was a clear northern objective, the aim was to take the town of Vicksburg, despite not seeming to be of much importance, this was the 'nail-head' that held the two half's of the confederate land together, also if Vicksburg was captured the confederates wouldn't be able to use the Mississippi river for trade or the movement of troops. However there is one issue that is overlooked here, Davis, the confederate leader knew that Vicksburg was important but only in a symbolic way, there was now little trade travelling up and down the Mississippi, nevertheless the loss of Vicksburg would still be a huge blow to the southern morale. Where as at Gettysburg there wasn't as much of a clear laid out plan, the south had realised that the only way they could get Lincoln to accept a southern peace settlement was to win victories on northern soil, hence why Lees troops were sent into Tennessee instead of sent to reinforce Vicksburg. ...read more.

The battle of Gettysburg would be fort differently, this time it would be the north on the defensive and the south on the attack, the fact that both armies had stumbled on each other and hadn't planned to fight at Vicksburg meant that there was little time to work out strategies, especially given that the new Union commander Meade was still relatively new to the job. The battle was to be fort on Cemetery hill just outside of Vicksburg, he north controlled the higher ground and was in a fish hook formation and Lee lined his men up in a similar fashion, despite being advised to move troops to try to outflank Meade Lee decided a full frontal attack was the only way to win 'I am going to whip them here, or they are going to whip me' this is partly due to supply lines and the fact the south didn't have many remaining and that if Lee decided to have a long battle he would run out of resources. ...read more.

fact that the 'rookie' commander Meade was able to defeat him served as a huge blow to the south and a huge boost to the north. The fact also that The south had won very few victories in the north and were loosing land like at Vicksburg, they were rapidly running out of resources as opposed to the north who were able to have imports and be able to last out for a longer war. The other crucial outcome of the defeats of the south meant that any aid they had been hoping for from Europe was now not going to happen, why would the superpowers, like Britain and France, help the loosing team, this again would serve as a huge blow to the south and as another boost to the north. Although the two battles were fort in quite different fashions the outcome was very much the same, victories for the north and crushing defeats for the south resulting in a loss of land, morale and aid from abroad and serving as huge strategic and psychological boosts for the Union. Brendan Egan 12E ...read more.