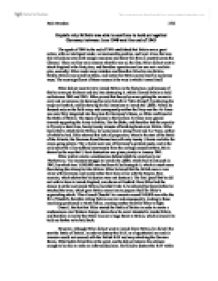 Explain why Britain was able to continue to hold out against Germany between June 1940 and the end of 1943 The epoch of 1940 to the end of 1943 established that Britain was a great nation, with an intelligent leader, an invulnerable position, and loyal allies, that was able to hold out even with meagre resources and heavy fire from a country across the Channel. There are four main reasons why this was so, the first; Hitler did not want to attack England in the first place, and therefore operation sealion was not a realistic plan, secondly; Hitler made many mistakes and therefore failed to ruin Britain, thirdly; Britain was saved by others, and lastly; that Britain saved itself in numerous ways. The most significant of these reasons is the way in which it saved itself. Hitler did not want to try to invade Britain in the first place, and because of this he never put his heart and soul into destroying it, which allowed Britain to hold out between 1940 and 1943. Hitler proved this theory by never getting the means to carry out an invasion, by showing his racial beliefs in 'Mein Kampf', by delaying his troops at Dunkirk, and by showing his full intentions to invade the USSR. Firstly, he focused only on the field army, and consequently neither the Navy nor the Air Force was ever fully integrated into the plans for Germany's future, as Hitler confirmed at the Battle of Britain. ...read more.

Another way in which Hitler's plan was foiled was in the Blitz. Britain survived seventy days of non-stop bombing on Britain, for two reasons; the years of little damage before the Blitz had allowed Britain to prepare, and secondly, the Blitz Spirit. Because Britain managed to live through the heavy bombing, German plans were thwarted and the British were able to hold out. Hitler's final mistake in his journey, was his continuous struggle to invade Russia, as this weakened German forces, by creating another front to fight against, and therefore took the pressure off Britain. As I have already discussed, Hitler created the Battle of Britain to create a smokescreen blinding Europe from 'Barbarossa.' Because of the time, effort, men and money that Hitler put into this, from 1942, he was not able to invade Britain. If Hitler had saved his forces and not attempted to invade Russia, an invasion of Britain would have been possible. Overall, if Hitler had wanted to invade Britain, he would not have been able to due to three main reasons. Firstly, the mistakes made in the Battle of Britain, for example the switch to daylight bombing and the under prepared German navy. Secondly, the Blitz, as Hitler thought this would make Britain surrender, however it did not. And Lastly, Hitler's continuous struggle to invade the USSR, which took up German resources and distracted them from ever attacking Britain. The third aspect of the period 1940-1943 which allowed Britain to hold out against Germany was the aid it received from other countries. ...read more.

This was shown mainly in the Battle of Britain, where Dowding had been planning Britain' s air defence for five years, and had therefore introduced command and communication systems meaning that fighters could be quickly and effectively directed to meet enemy attacks. Radar operators in England could also accurately estimate the size and speed of approaching aircraft meaning that RAF planes were not destroyed on the ground, but in the air ready to attack the Luftwaffe. Another way in which better technology was shown in the Battle of Britain was in planes. The only plane that could compare to the Spitfire, was the Messerschmitt 109, but it had a short range so was at a distinct disadvantage fighting over Britain. Because British aircraft and technology was so strong, more German then British aircraft were destroyed between July and August 1940. Although in the Battle of the Atlantic, British technology extended to the ASDIC, which did not provide the help expected, as it could only pick up ships under a kilometre away. The way in which Britain helped itself was by preparing, evacuating it's men from Dunkirk, using propaganda to unite it and using the most up-to-date technology. In conclusion, the key reason that Britain was able to endure against Germany from 1940 to the end of 1943 was due to itself. Hitler may or may not have wanted to invade the UK, however he would not have been able to, as through an excellent leader, Britain made correct and informed decisions that led it to be well prepared, united, and equipped with revolutionary technology, which enabled it to hold out against a tyrannous and hubris Hitler. Bella Brandon 2122 ...read more.