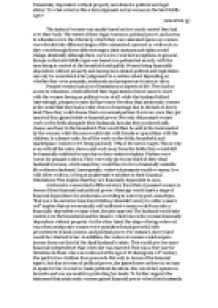 'Financially dependent, without property and denied a political and legal status.' To what extent is this a fair judgement on lay women in the late Middle Ages?

﻿?Financially dependent, without property and denied a political and legal status.? To what extent is this a fair judgement on lay women in the late Middle Ages? James Kim (g) The status of women was mostly based on how much control they had over their body. The extent of their legal, economic, political power, and access to education were the criteria by which they were assessed upon. Lay women were divided into different stages of life: unmarried, married, or widowed. As they went through these different stages, their statuses and rights would change drastically although there were a few recorded exceptions. In general, Europe in the late Middle Ages was based on a patriarchal society, with the men being in control of the household and guilds. Women being financially dependent, without property and having been denied political and legal status can only be considered a fair judgement to a certain extent depending on whether they were peasants, aristocrats and prosperous women in cities. Peasant women had a lot of limitations in aspects of life. They had no access to education, which affected their legal status when it came to court with the women having no political voice at all, while the husband talked. ...read more.

This would give her more financial independence than when she was married. This was a true case for Christine de Pisan who was widowed at the age of 25 during late 14th century. She paid for her children from proceeds. Not only in terms of the financial aspect, but also in terms of political power, she gained more as there is no man to speak for her in court or make political decisions. She voiced her opinion in lawsuits and was successful in protecting her lands. To further support the statement that aristocratic women gained financial power when their husbands died, there is a case study of Mahaut of Artois. She inherited a country from her father in 1302, after her husband and brother were both killed. Recorded bailiffs show her organized and effective management of finance. She determined her own legal procedure and constructed a method of electing municipal magistrates. She managed to protect her land against the Church in a court in Paris. She even judges internal disputes in town. The elevation in her legal status is undoubtedly clear with her political stabilisation being clearly visible. She sets up her own cultural centre of manuscripts as well as religious institutions and hospitals. ...read more.

The level of discrimination and treatment of women varied between guilds but the court eventually ?curtailed her business?, which highlights her restricted political and legal status. Even on the financial side of female crafts, men frequently exploited them. The middlemen would cut off supplies or significantly raise prices, which would hit the women?s finance significantly. In France, women were traditionally paid less than men, mostly half of men?s wages. The poorest members of cities were the single or widowed unskilled women worker, which links back to the women being financially dependent. In 1410 Frankfurt, 33.6% of women were below the poverty line, which clearly shows that many unskilled women workers were living completely different lives from the prosperous widowed women in the city centres. In conclusion, women of different social statuses had different standards of life in terms of their financial, political, and legal status. It also had a lot of relevance to the woman?s current marital status. Except for peasant women and unskilled women workers in the cities, women of other social classes seemed to show financial independence, and obtained more political and legal power when they became widows. They became more independent and could voice their opinion in public and actively became involved in the financial sector of society. Although there are a few cases of women becoming very successful as they turned into a widow, most lay women were restrained financially, politically, and legally to a certain degree. ...read more.