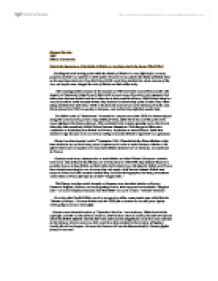 Explain the importance of the Battle of Britain as a turning point in the Second World War?

Deciding the main turning point within the Battle of Britain is a very difficult job, as many people have their own opinions on this matter. However, in my opinion the Battle of Britain takes up the most important role. If we think about it this could have decided the whole outcome of the war, and maybe even changed the role of Britain and their allies today.

This amazing battle took place in the summer of 1940 and lasted around three months with August and September being its peak. Before this however many discussions and arguments had taken place between Britain and the Soviets due to their possible alliance. With Poland being in a very bad position at this moment in time, they decided to take the help of the Soviets. They where being attacked from both sides, USSR on the from the east and of course Germany from the west. Poland feared the USSR as equally as Germans, and realised they definitely needed help.

For Hitler’s plan of “lebensraum” he needed to conquer part of the USSR, he almost enjoyed doing this as he had always had a deep dislike for them. Little did he know at this point at the recent signing of the Nazi-soviet pact. This consisted f both counties agreeing not to attack each other they then secretively divided Poland between themselves. This then gave Hitler extra confidence as he felt free from Britain and France, he felt free to attack Poland. Stalin then decided to sign the pact as he was sick of waiting around for Britain to sign their own agreement.

Poland was then invaded on the 1st September 1939, Chamberlain the Prime Minister at the time decided to try and hold many peace conferences in order to make Germany withdraw. His efforts where seen as hopeless. Two days later Britain declared war on Germany, soon followed by France.

Germany made many attempts also to make Britain and other Western European countries back down. One of these is the Phoney war. It took place in 1939/1940, they believed they had a possible chance as they Britain and their allies had backed down with Munich. Britain and France then started pre-paring for war, however they only made a half hearted attempt. Britain sent troops to France as both countries realised they would be the target first. Not many precautions where taken as France felt safe due to their “maginot line.”

The Phoney was then ended abruptly as Germany soon launched attacks on Norway, Denmark, Belgium, Holland, and not forgetting France, their supposed un-breakable “Maginot Line” was soon trampled. It became cleat that Hitler was out to create a “Greater Germany”.

Now also after Dunkirk Hitler was in a very good position, some people even called him the “Master of Europe.” However Britain and the USSR (the countries he was still yet to defeat) where going to put up a mean fight.

One the cross channel invasion of “Operation Sea Lion” was underway, Hitler involved the Luftwaffe, and this was the German air force. Their motives where to destroy the RAF aircraft and attack the British Airfields. Had the RAF been destroyed the English feet could have been attacked by the German air force and navy, this would have then resulted in the invasion of England. Luckily this did not happen. However the Germans did use the Messerschmitt (a German fighter plane). It was used

to destroy and apposing British Planes such as the Spitfire or Hurricane. To the Germans surprise the Messerschmitt and the Spitfire where more evenly matched than first expected. This was worrying for Hitler as he was definitely in it to win it. If he didn’t win he had to call off the invasion. This is what he did.

The English pilots definitely had some disadvantages against the German fighter planes. Firstly the number of pilot the Germans had was very fast, they where also training up to 800 new pilots per month. England was definitely lacking in this department, they were only training up just 200 new pilots. The ratio was sadly 824 fighters and 1017 bombers to only 591 fighters from England. It wasn’t only this, it took only five minutes for the Luftwaffe to cross the English channel, and to the oppositions misfortune it took around fifteen minutes for the Spitfires to leave the ground and reach the height of the planes they needed to intercept.

In the height of the Battle of Britain the Germans were loosing many more planes than the British. With around 16– 30th August, Germany loosing 332 planes and Britain loosing only 249. Also with the new bomber factories, Britain where creating on average 563 new planes! This looked hopeful as Britain was leaving Germany behind with the production slipping to only 156 new planes for Germany ever month.

On 7th September it became apparent to the British that Hitler must have changed his motives as the bombers started targeting city scenes such as London, Birmingham and Manchester. People then believed that the Germans had now abandoned their original aims. This was really worrying to England and their Citizens. It was now clear that one of Hitler’s new aims was to weaken the morale of the British people, this may have lead Churchill (the new British Prime Minister) to back down, Churchill had a very negative opinion of Hitler, and he was definitely not going to back down to his policy of appeasement.

This was seen as another key event in the turning points of the war. The replacement of Chamberlain to Churchill. Churchill was just what Britain and their troops needed, he was known for his fighting power, and he made it clear that they where not going to back. This was a very important even as if Chamberlain had carried on ruling over England, Germany might have then had the chance to back down.

A pattern then started to form and London was to be bombed every night for the next couple of months. This was now known as the “Blitz” It turned out that over a period of 77 days London was bomber every night bar one. The other cities bomber included Birmingham, Bristol, Manchester, Liverpool and Southampton etc.

One particular important event within the Blitz was the bombing of Coventry in November 1940. It lasted around 10 hours and a third of the city was destroyed, including the motor-works and aero-factories and even the cities Cathedral. Moreover 4,000 people where killed.