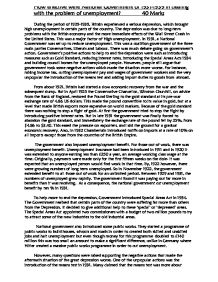 How effective were National Government of 1931-1939 in dealing with the problem of unemployment? 20 Marks

How effective were National Government of 1931-1939 in dealing with the problem of unemployment? 40 Marks During the period of 1929-1939, Britain experienced a serious depression, which brought high unemployment in certain parts of the country. The depression was due to long-term problems with the British economy and the more immediate effects of the Wall Street Crash in the United States. This was a major factor of High unemployment. In 1931, a National Government was set up to reduce unemployment. This was a coalition government of the three main parties Conservatives, Liberals and Labour. There was much debate going on government's action. Government's positive actions to help to end the depression were such as introducing measures such as Gold Standard, reducing interest rates, introducing the Special Areas Acts 1934 and building council homes for the unemployed people. However, people still argue that government took some negative actions which made the situation more worse. For instance, raising income tax, cutting unemployment pay and wages of government workers and the very unpopular the introduction of the means test and adding import duties to goods from abroad. From about 1921, Britain had started a slow economic recovery from the war and the subsequent slump. But in April 1925 the Conservative Chancellor, Winston Churchill, on advice from the Bank of England, restored the Pound Sterling to the gold standard at its pre-war exchange rate of 4.86 US dollars. This made the pound convertible to its value in gold, but at a level that made British exports more expensive on world markets. ...read more.

The idea was that if more British goods were bought, more would have to be produced, and so more people would be employed to produce them. The Import Duties Act benefited British car and electrical goods industries in the south of England but had little effect in areas of high unemployment. Moreover, other countries put taxes on goods coming into their country from Britain. This made it more difficult for British export industries. After looking at all the evidences, it could be argued the National Government tried to overcome the depression to a less extent. It is true that government tried to overcome the depression in Britain caused due to the Wall Street crash in the United States. By the end of the 130s, unemployment had fallen to one million. This was due to the government policies such as introducing unemployment benefit, public works etc. The industries were improving slowly as a result of the Special Areas Act in 1934 that aimed to attract some of the new industries to the old industries areas. However, some measures taken by the government such as the Means Tests 1931 and Import Duties Act 1932 were the actions that made government extremely unpopular. General Strike In 1925 the mine-owners announced that they intended to reduce the miner's wages. The General Council of the Trade Union Congress responded to this news by promising to support the miners in their dispute with their employers. ...read more.

The following day, the TUC General Council visited 10 Downing Street to announce to the British Government that the General Strike was over. At the same meeting the TUC attempted to persuade the Government to support the Samuel proposals and to offer a guarantee that there would be no victimization of strikers. This the Government refused to do. As Lord Birkenhead, a member of the Government was to write later, the TUC's surrender was "so humiliating that some instinctive breeding made one unwilling even to look at them." On 21st June 1926, the British Government introduced a Bill into the House of Commons that suspended the miners' Seven Hours Act for five years - thus permitting a return to an 8 hour day for miners. In July the mine-owners announced new terms of employment for miners based on the 8 hour day. The miners were furious about what had happened although the General Strike was over, the miners' strike continued. For several months the miners held out, but by October 1926 hardship forced men to begin to drift back to the mines. By the end of November most miners had reported back to work. However, many were victimized and remained unemployed for many years. Those that were employed were forced to accept longer hours, lower wages and district agreement. In 1927 the British Government passed the Trade Disputes and Trade Union Act. This act made all sympathetic strikes illegal, ensured the trade union members had to voluntarily 'contract in' to pay the political levy, forbade Civil Service unions to affiliate to the TUC, and made mass picketing illegal. ...read more.