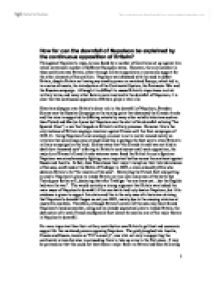 How far can the downfall of Napoleon be explained by the continuous opposition of Britain?

How far can the downfall of Napoleon be explained by the continuous opposition of Britain? Throughout Napoleon's reign, he was faced by a number of Coalitions set up against him which contained a number of different European states. However, the only constant in these coalitions was Britain, either through military opposition or economic support for the other elements of the coalition. Napoleon was obsessed with the need to defeat Britain, despite Britain not having any sizable power on mainland Europe, which led to, in a series of events, the introduction of the Continental System, the Peninsular War and the Russian campaign. Although it is difficult to assess Britain's importance in strict military terms, and many other factors were involved in the downfall of Napoleon, it is clear that the continuous opposition of Britain plays a vital role. Historians disagree over Britain's direct role in the downfall of Napoleon; Brendan Simms sees the Russian Campaign as the turning point that destroyed the Grande Arm�e and this view is supported to differing extents by many other notable historians such as Jean Tulard and Martyn Lyons but Napoleon saw the start of his downfall as being "the Spanish Ulcer", a war that hinged on Britain's military presence. ...read more.

Napoleon could not allow those that did not comply to go on dealing with the British, and the common solution to this was to either appoint a relative as ruler of the country or simply annex it. The existence of the Continental System is not a factor in Napoleon's downfall in itself, but the actions Napoleon takes to secure the success of it are. Napoleon's wish to prevent Portugal from trading with Britain was a primary reason for invading the Iberian Peninsula. A further reason must be Napoleon's ambition and expansionist aims, which many historians believe made his downfall inevitable right from the outset. Initially, Napoleon's wars had been fought to secure what the French population saw as their natural boundaries, the Alps, the Rhine and the Pyrenees, which had received the support of the French people. However, as Jean Tulard puts it, "the campaigns of 1805 and 1806 were imposed upon her" but as they "conformed to the logic of the revolutionary wars" they were accepted by French opinion. The Peninsular War saw the first deviation from this theme, it was more to do with Napoleon's dynastic interests than an enlightenment for "black Spain". ...read more.

The role of Britain is a vital one in bringing down Napoleon, especially as it remained the only constant threat to France, excepting the uneasy peace of Amiens, and persuade the other continental powers to repeatedly take up arms against Napoleon. The Continental System is a further long term cause, as it forces Napoleon into actions that proved disastrous for France and Napoleon's own aspirations and sparked his downfall. The "Spanish Ulcer" drained much of France's resources and caused a split between Napoleon and the bourgeois but would not have brought down Napoleon on its own. If one factor has to be isolated to most explain the turn around of Napoleon's fortunes, it would have to be the Russian campaign, as it destroyed Napoleon's forces whilst galvanising his opponents, but it was not until Russia gained British support that it actually advanced outside its own borders to defeat Napoleon. Britain is like a cancer on Napoleon's empire, an ailment that Napoleon had no way to cure which constantly allowed the more potent scourges of Russia, Austria and Prussia to batter Napoleon's defences until eventually he was too weak to continue; the Napoleonic Empire dead. 1 Napoleon Bonaparte and the legacy of the French Revolution - Martyn Lyons 2 Europe under Napoleon 1799-1815 - Michael Broers ?? ?? ?? ?? 1 ...read more.