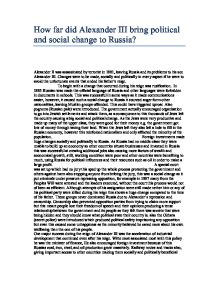 How far did Alexander III bring political and social change to Russia?

How far did Alexander III bring political and social change to Russia? Alexander II was assassinated by terrorist in 1881, leaving Russia and its problems to his son Alexander III. Changes were to be made, socially and politically in every aspect if he were to avoid the unfortunate events that ended his father's reign. To begin with a change that occurred during his reign was rusification. In 1885 Russian was made the official language of Russia and other languages were forbidden in documents in schools. This was successful in some ways as it made communications easier, however, it caused such a social change to Russia it sourced anger form other nationalities, leaving Muslim groups offended. ...read more.

causing more factors of wealth and economical growth, still, working condition were poor and other countries were benefiting to much, using Russia for political influences and their resources such as oil in order to make a large profit. A special court was set up which had no jury this sped up the whole process protecting the government and others against harm also stopping anyone from bribing the jury, this was a social change as it put criminals under pressure repressing opposition, for example in 1887 many from the Peoples Will were arrested and the leaders executed, without the court this process would not of been as efficient. Although attempts of his assignation were still made nether him or any of his political party were killed during his reign this shows a huge change compared to the time of his father. ...read more.

One major success during the reign of Alexander III was the acceleration of industrial development that continued even after his reign. Witte most associated most with this policy he was the minister of finance, He also encouraged foreign investment because of this Russias coal, iron, steel, and oil production grow massively. Railway routes and tracks also, giving important access to other countries making them socially and politically beneficial allowing Russians to communicate and spread their trade effortlessly without facing difficult terrain. The urban labour force grew rapidly. For example the population of St Petersburg and Moscow increased by over double between 1863 and 1897.due to imployment of thousands in factors. Wages, hours of work and housing conditions were usually very poor. This was especially true in Moscow. Government attempts to improve conditions were poor causing political and social frustation. ?? ?? ?? ?? ...read more.