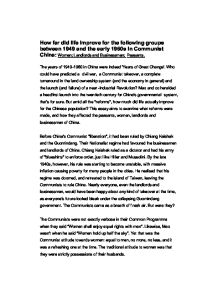 How far did life improve for the following groups between 1949 and the early 1960s in Communist China: Women; Landlords and Businessmen; Peasants.

How far did life improve for the following groups between 1949 and the early 1960s in Communist China: Women; Landlords and Businessmen; Peasants. The years of 1949-1960 in China were indeed 'Years of Great Change'. Who could have predicted a civil war, a Communist takeover, a complete turnaround in the land ownership system (and the economy in general) and the launch (and failure) of a near-Industrial Revolution? Mao and co heralded a headfirst launch into the twentieth century for China's governmental system, that's for sure. But amid all the "reforms", how much did life actually improve for the Chinese population? This essay aims to examine what reforms were made, and how they affected the peasants, women, landlords and businessmen of China. Before China's Communist "liberation", it had been ruled by Chiang Kaishek and the Guomindang. Their Nationalist regime had favoured the businessmen and landlords of China. Chiang Kaishek ruled as a dictator and had his army of "blueshirts" to enforce order, just like Hitler and Mussolini. By the late 1940s, however, his rule was starting to become unstable, with massive inflation causing poverty for many people in the cities. He realised that his regime was doomed, and retreated to the island of Taiwan, leaving the Communists to rule China. Nearly everyone, even the landlords and businessmen, would have been happy about any kind of takeover at the time, as everyone's future looked bleak under the collapsing Guomindang government. ...read more.

Mao and his ragtag band of Communist officials had the peasants' support, though. Many peasants supported the Communists already; after all, they were the original worker's party, and they had been very popular in the liberation areas, respecting the locals and trying out some reforms with regard to land and women with great success. The first step he took towards his agricultural revolution was by profiling all the peasants and teaching them how to sort themselves into the classes mentioned above. Land was then redistributed between the peasants evenly. This table illustrates how the land reform system changed: % houses % crop area owned Before After Landlords 2.6 28.7 2.1 Rich peasants 3.6 17.6 6.3 Middle peasants 35.8 30.2 44.8 Poor peasants and others 58.0 23.5 46.8 The Agrarian Reform Law turned the land ownership system on its head. Rich peasants lost land, poor peasants gained the rich peasants' lost land and middle peasants stayed roughly the same (the increase is due to the heavy imbalance between landlords and poor peasants; there was almost too much land to go round after the landlords had been stripped of their land). The peasants had troubles, however: they found that they hadn't enough money or equipment to cultivate the land. Mao suggested that peasants therefore organise themselves into Mutual Aid Teams, groups of peasants who would share each other's land and equipment. ...read more.

Mao Zedong really should have been forced to resign after this; indeed, if Chinese society had not been so utterly brainwashed I believe he would have. Instead, he was forced to step down slightly, but was still a very prominent figure. And, crucially yet unbelievably, he retained the public's support after all his crimes against them. The peasants were still with him. But I do not believe life got better for peasants under the Communists during the period I have described. An improved living standard cannot justify the removal of identity from an entire nation and a famine killing millions. I do not believe that the Communists did a lot of good for the vast majority of China. The only segment of Chinese society whose lives improved markedly were women, and when evaluating the importance of the reforms to end sexism, you have to take into account that most women were also peasants. So, whilst they were freed from being killed at birth and so on, they were also left to die later on in the famine, or through overwork, since women now had to work just as hard as men. The lives of landlords and businessmen could hardly be expected to get better under the Communists. However, perhaps they were unnecessarily cruel; execution hardly seems necessary. But Mao's regime's performance regarding peasants is unforgivable. A peasant-focused regime making thing worse for peasants is unforgivable, and life indeniably was worse for peasants by 1961. ?? ?? ?? ?? 2 ...read more.