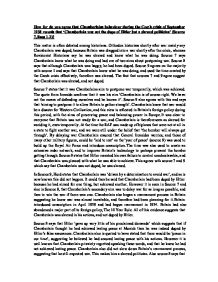 In Source 9, Hurd states that Chamberlain was 'driven by a determination to avoid war', and as is now known this did not happen. It could then be said that Chamberlain had been duped by Hitler because he had aimed for one thing, but achieved another. However it is seen in Source 7 and also in Source 9, that Chamberlain's secondary aim was to delay war for as long as possible, and then to win the war if there was one. Chamberlain also began a rearmament process in Britain suggesting he knew war was almost inevitable, and therefore had been planning for it. Britain introduced conscription in April 1939 and had begun rearmament in 1934. Britain had also abandoned a major part of its foreign policy, The 10 Year Rule. All of this evidence suggests that Chamberlain was shrewd in his actions, and not duped by Hitler. Source 8 says that Hitler 'gave up very little of his proclaimed demands' which suggests that if Chamberlain thought he had achieved lasting peace at Munich then he was indeed duped by Hitler's false assurances. ...read more.

Source 9 also largely contradicts Source 7 by implying that Chamberlain was not actually doing a deal to buy time or because of the moral merits of the case for his benefit, but because he wanted peace almost at any price and he had fooled himself into believing that it was possible. This is seen when Chamberlain got Hitler to sign the declaration of peaceful intent on 30th September, and Chamberlain came away believing war had been avoided, when just a year later Germany invaded Poland. Chamberlain can be seen here to have been duped, although it can still be argued that Chamberlain did not stop rearmament, or prevent conscription, suggesting there was an element of shrewdness. Therefore, in conclusion, Chamberlain was shrewd, as he managed to achieve his aim of postponing war and denying Hitler his war. However the extent to which he was shrewd is limited because he left Hitler's demands unchanged, and ultimately he believed many lies that Hitler told him. ?? ?? ?? ?? ...read more.