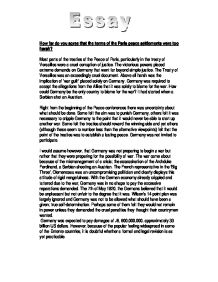 How far do you agree that the terms of the Paris peace settlements were too harsh?

How far do you agree that the terms of the Paris peace settlements were too harsh? Most parts of the treaties of the Peace of Paris, particularly in the treaty of Versailles were a cruel corruption of justice. The victorious powers placed extreme demands on Germany that went far beyond simple justice. The Treaty of Versailles was an exceedingly cruel document. Above all harsh was the implication of 'war guilt' placed solely on Germany. Germany was required to accept the allegations from the Allies that it was solely to blame for the war. How could Germany be the only country to blame for the war? It had started when a Serbian shot an Austrian. Right from the beginning of the Peace conferences there was uncertainty about what should be done. Some felt the aim was to punish Germany, others felt it was necessary to cripple Germany to the point that it would never be able to start up another war. Some felt the treaties should reward the winning side and yet others (although these seem to number less than the alternative viewpoints) felt that the point of the treaties was to establish a lasting peace. Germany was not invited to participate. I would assume however, that Germany was not preparing to begin a war but rather that they were preparing for the possibility of war. The war came about because of the mismanagement of a crisis; the assassination of the Archduke Ferdinand, a Serbian shooting an Austrian. ...read more.

The Germans always demanded high reparations so what they do is only being done to them, the only really major losses were the over-sea colonies. If the terms were too harsh on Germany would they have been able to produce twice as much steel as Britain in 1925. In cannot have been too harsh because many new countries were made, some given self-determination and others used as buffer states e.g. Poland and Czechoslovakia. Lithuania, Estonia and Latvia became independent states (acquired by Germany from Russia at Brest-Litovsk). Self-determination formally expresses a central claim of nationalism, namely the entitlement of each nation to its own nation state. And buffer states are a country lying between two rival or potentially hostile greater powers, which by its sheer existence is thought to prevent conflict. Some countries which were taken from the defeated countries, were being mandated (getting prepared for independence) Although Turkey was treated very harshly, they were given a second treaty which was the treaty of Lausanne where turkey gained quite a few of it areas back such as eastern Thrace and 2 Aegean islands. All the countries defeated were given military reductions; this is not harsh as it is trying to prevent another war from beginning. If the countries have good military then they are able to begin a new war but the military should be limited to a certain amount which is enough to defend themselves in the case of invasion. * Manufacturing of weapons is prohibited. ...read more.

However, even the payment of this small percentage of the original reparations (219 billion Gold Reich marks) still placed a significant burden on the German economy, accounting for as much as one third of post-treaty hyperinflation. The provisions forcing the uncompensated removal of resources and industrial equipment sowed further resentment. Since neither rockets nor glider aircraft were mentioned in the Versailles treaty, Germany spent money on these technologies, including Wernher von Braun's rocket experiments, which in no doubt helped the development of the future space industry. Large glider aircraft designs led to the design of the large Me-321 during World War II which later was motorized and become the Me-323, the largest land-based plane at the time. There was the Chanak crisis (1922) and early failures of the League of Nations such as preventing Mussolini from invading Corfu, and the French and Belgians from invading the Ruhr. Most of the decisions made in Paris and various other events lead up the start of World War 2. Many people believed that the war heralded the end of the world as they had known it, including the collapse of capitalism and imperialism. Communist and socialist movements around the world drew strength from this theory, enjoying a level of popularity they had never known before. These feelings were most pronounced in areas directly or particularly harshly affected by the war, such as central Europe, Russia and France. Resources Used * Democracies and Dictatorships- Alan Todd * An introduction to modern history- Alan Farmer ...read more.