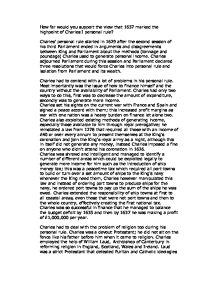 How far would you support the view that 1637 marked the highpoint of Charles I personal rule?

How far would you support the view that 1637 marked the highpoint of Charles I personal rule? Charles' personal rule started in 1629 after the second session of his third Parliament ended in arguments and disagreements between King and Parliament about the methods (tonnage and poundage) Charles used to generate personal income. Charles adjourned Parliament during this session and Parliament declared three resolutions that would force Charles into personal rule and isolation from Parliament and its wealth. Charles had to contend with a lot of problems in his personal rule. Most importantly was the issue of how to finance himself and the country without the availability of Parliament. Charles had only two ways to do this, first was to decrease the amount of expenditure, secondly was to generate more income. Charles set his sights on the current war with France and Spain and signed a peace accord with them; this increased profit margins as war with one nation was a heavy burden on finance let alone two. ...read more.

Laud was a strict Protestant that detested Puritan and Catholic ideologies within the kingdom and especially within the Anglican Church; he implemented a policy of religious reform that intended to cement the Church of England as the official and only church of the Kingdom: 1. All vacant positions for Bishop were to be replaced by a Bishop of Arminian denomination. 2. All parish churches and clergy were to follow newly introduced Canons which effected the interior of the church: a. Church was to be decorated; reintroduction of stained glass windows and ornaments. b. All parish clergy were to wear Catholic garb. c. Follow a reformed Arminian sermon. 3. All university education was to be Arminian centred. Charles also had to manage the problem of how he is going to rule his 3 Kingdoms and Principality, especially how he was going to implement his policies in the largely Gaelic speaking and Catholic Ireland. To aid him in this Charles placed Thomas Wentworth as Lord Deputy of Ireland, the ruling figure in Ireland under the King. ...read more.

Charles' kingdom was truly stable, prosperous and wealthy. Religion, finance and uniform rule were all reaching a positive equilibrium coming up to 1637 and it is indeed possible this could've continued if it wasn't for one important mistake. This was the forced introduction by Charles of the English Prayer Book in Scotland which although supported by Scottish Bishops, sparked off unrest, riot and violence in Scotland which led to the need for recalling of Parliament and to the beginnings of the English civil war. One could truly say that 1637 was the zenith of Charles' personal rule, even his rule as a whole. The necessity for Parliament after the riots in Scotland to finance the First Bishop's war meant that Parliament could pressure Charles into giving into their demands. On top of that, the First Bishop war was contagious and uncontrolled rage that shortly spread throughout the whole of the Kingdom and through Ireland and also parts of England. After 1637, Charles was now on a downhill struggle. The argument for the view that Charles I was at his zenith in 1637 cannot be denied easily. ...read more.