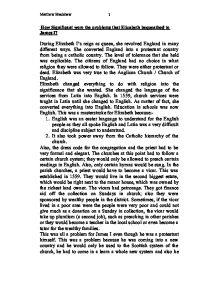 How Significant were the problems that Elizabeth bequeathed to James I

How Significant were the problems that Elizabeth bequeathed to James I? During Elizabeth I's reign as queen, she revolved England in many different ways. She converted England into a protestant country from being a catholic country. The level of tolerance that she held was explicable. The citizens of England had no choice in what religion they were allowed to follow. They were either protestant or dead. Elizabeth was very true to the Anglican Church / Church of England. Elizabeth changed everything to do with religion into the significance that she wanted. She changed the language of the services from Latin into English. In 1559, church services were taught in Latin until she changed to English. As matter of fact, she converted everything into English. Education in schools was now English. This was a masterstroke for Elizabeth because:- 1. English was an easier language to understand for the English people as they all spoke English and Latin was a very difficult and discipline subject to understand. 2. It also took power away from the Catholic hierarchy of the church. Also, the dress code for the congregation and the priest had to be very formal and elegant. The churches at this point had to follow a certain church system; they would only be allowed to preach certain readings in English. ...read more.

Unfortunately, these laws had to be enforced by the Justices of the Peace - men from the very class which had most to gain from ignoring them. England was thus a country of serious social tensions at the end of the Tudor period. The old nobles resented the power of the 'new' men. Those unsuccessful in the scramble for the crown patronage were likely to become embittered rivals of those more fortunate. This was especially so when the patronage took the form of grants of monopoly, for the lucky man gained directly at the expense of the remainder. The Tudors had overworked the J.P.s, who received no credit or reward for their part in administration. James was to find it difficult to coerce or bribe if you will, the J.P.s into carrying out their duties. However, the prerogative courts and the government supervised the whole system; this caused it to come to a steady, slow grinding halt. As you can see this would cause a problem for James after Elizabeth's reign. Elizabeth also bequeathed the problem of war and policy to James. This all became a problem when Henry VIII divided with Rome but Elizabeth managed to maintain level of peace as she prevented a civil or religious war in then country. Elizabeth had left a war with Spain for James I, and a whole complex of national and religious prejudices against foreigners and Catholics. ...read more.

However, G.R. Elton disagrees that Elizabeth had not ruled sufficiently enough, in his book 'England under the Tudors', he says, " The Church of England in the 1590's was a time of consolidation and mounting triumph, 1590's, the Queen's difficulties with parliament continued, The main problem was money. The Tudor age was over 2nd March 1603, there was no more Tudors, it was a new reign about to open, problems arose, in 1607 Stuart incompetence, wonderful family with achievements helped by others significantly". This shows that he really admires Elizabeth because he describes her family as 'wonderful family and achievements' and her reign was 'mounting triumph'. I think that the problems that Elizabeth had bequeathed to James I were significant because the problem with succession was that he had to earn respect from England as he was a Scottish King and a foreigner, he had to get used to how the trading system worked and try and make peace with Spain and France. In addition, he also had to try and get used to the way the parliament was run and try to make himself heard as local MP's were becoming over powering. In addition, he had to try to maintain the level of religion that had been produced by Elizabeth and make sure that everything was running smoothly. Therefore, James I had many significant problems to deal with as the new king of England. 1 1 Matthew Bradshaw ...read more.