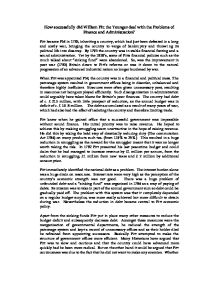 How successfully did William Pitt the Younger deal with the Problems of Finance and Administration? Pitt became PM in 1783, inheriting a country, which had just been defeated in a long and costly war, bringing the country to verge of bankruptcy and throwing its political life into disarray. By 1793 the country was in stable financial footing and a sound administration. Yet by the 1820's, some of Pitts financial policies such as the much talked about "sinking fund" were abandoned. So, was the improvement in post war (1783) Britain down to Pitt's reforms or was it down to the natural progression of an advanced industrial nation no longer burdened by war. When Pitt was appointed PM, the country was in a financial and political mess. The patronage system resulted in government offices being in disorder, unbalanced and therefore highly inefficient. Sinecures were often given unnecessary post, resulting in resources not being employed efficiently. Such disorganization in administration could arguably have taken blame for Britain's poor finances. ...read more.

Pitt immediately identified the national debt as a problem. The interest burden alone was a huge drain on resources. Interest rate were very high as the perception of the country's economic strength was not good. There was a huge problem of unfounded debt and a "sinking fund" was organised in 1786 as a way of paying of debts. Its mission was to take in part of the annual government sum so debt could be gradually paid off. The problem with this system was that it completely depended on a regular budget surplus, was more easily achieved but more difficult to obtain during war. Nevertheless the reduction in debt became central to Pitt economic policy. Apart from the sinking funds Pitt put in place many other measures to reduce the budget deficit and subsequently decrease debt. Amongst these measures were the reorganisation of governmental departments, he reduced the strength of the patronage system and kept a record of unnecessary offices and as their holder died he refrained from appointing successors. Basically Pitt attempted to make the structure of government offices more efficient. ...read more.

Many of the ideas that Pitt had implemented had been adopted by his predecessors. In many cases Pitt had preferred to adapt other people procedures and make them his own. The initiative to take them was Pitts attribute but as similarly as he had first managed to get into parliament (patronage and good family name) it is possible people could again argue about his luck. His financial and administrative reforms might be questioned. Though his measures did restore financial confidence it did not by 1793 reduce permanently reduce debt. The latter being due to the increase in expenditure resulting from the war with France. Pitt did not suspend the sinking fund, which was only workable with a budget surplus. In conclusion it may be said that Pitt, unlike his predecessors, was fortunate to govern a country not at war and that many of the reforms were not originally his. However, it is without argument that debt had been reduced, budget surplus created and administration had become more efficient. Whilst we believe he had some fortunate he still had the vision to implement these reforms, albeit in some cases slowly. ...read more.