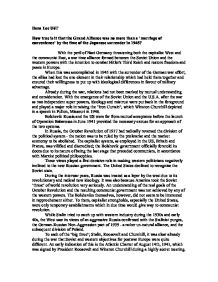 How true is it that the Grand Alliance was no more than a 'marriage of convenience' by the time of the Japanese surrender in 1945?

Ilana Lee U6T How true is it that the Grand Alliance was no more than a 'marriage of convenience' by the time of the Japanese surrender in 1945? With the peril of n**i Germany threatening both the capitalist West and the communist East, a war time alliance formed between the Soviet Union and the western powers with the intention to combat Hitler's Third Reich and restore freedom and peace in Europe. When this was accomplished in 1945 with the surrender of the German war effort, the allies had lost the one element in their relationship which had held them together and ensured their willingness to put up with ideological differences in favour of military advantage. Already during the war, relations had not been marked by mutual understanding and consideration. With the emergence of the Soviet Union and the U.S.A. after the war as two independent super powers, ideology and mistrust were put back in the foreground and played a major role in raising the "Iron Curtain", which Winston Churchill depicted in a speech in Fulton, Missouri in 1946. ...read more.

To each of the "big three"; Stalin, Roosevelt and Churchill, it was clear already during the war that Soviet and western objectives for postwar Europe were quite different. An early indication of this is the Atlantic Charter of August 14th, 1941, which was signed by President Roosevelt and Winston Churchill during a highly secret meeting. The charter defined the objectives of the two strongest western powers for postwar Europe, which, with the demand for the right of self-determination for European countries, was bound to conflict with Stalin's policy at a later stage. A first meeting between the "big three" was held at the conference of Tehran in November-December 1943. With the war still going on, none of the politicians was willing to risk a break over postwar problems before the conflict was actually won. Churchill, in this spirit, gave in to Stalin's demand for acceptance of Russian territory gained before the invasion of Russia by Hitler. At the conference of Yalta in February 1945, clashes between Stalin and his Western Allies were to become more apparent. ...read more.

On the surface, issues were settled and more detailed agreements to be made by future conferences of the foreign ministers. In reality, however, the Allies were drifting apart. New US President Harry Truman, with the newly developed atomic b**b at his disposal, dictated the Potsdam meeting and stood for a dramatic change in US policy towards the Soviet Union. His direct demands and unwillingness to share the secret of the atomic b**b with the Russians did not help to foster relations with Stalin, whose view was that the American attitude towards the Soviet Union has perceptibly cooled once it became obvious that Germany was defeated and that it was as though the Americans were saying that the Russians were no longer needed. This shows that the Grand Alliance was simply a 'marriage of convenience', as the two sides had not wanted to fight the war alone, but were at odds with each other over empire and had different postwar agendas. The two countries who had been allies during the war years were now heading for an entirely different war between themselves - the Cold War. ...read more.